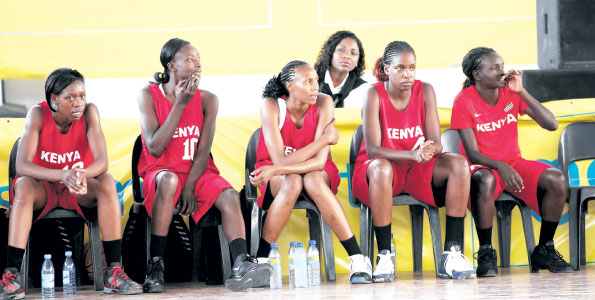 The Kenyan Women Basketball team following the proceedings of a previous match. The team has lamented of neglect from the government and poor conditions in Dakar, Senegal where they are representing the country in the AfroBasket women Championship. Photo/KBC

Kenyan national teams’ woes continue to pile as the Ministry continuously neglects teams that represent the country in international tournaments.

The latest lamenters are the Women’s national basketball team who sent a distress call to Kenya saying that they are having a difficult time in Senegal where they are participating in a tournament.

The lady Morans who are currently representing the country in the FIBA AfroBasket Women championship in Dakar, Senegal sent a distress signal on Monday through a video.

In the video that went viral on social media, one of the players said that they were having a hard time in Dakar as they have been neglected by the government.

The lady morans had been forced to travel without two players and the assistant coach something they were sure to mention in the video. The players said that they were finding it difficult to play in the tournament with only 10 players and one coach.

“We have experienced very poor standards. We have only been paid Sh 10,000 from this assignment. We are being forced to play an international tournament with only ten players and one coach while being expected to perform at a high level which puts us at a great disadvantage,” a member of the team said in the video.

The players addressed the video to the Women’s commission which is an extension of the women national team because they hoped that the commission would hear them. The players claimed that the budget that was allocated to them meant that each player gets Sh 5000 per day.

According to the lady morans, the budget was sent immediately after the team qualified for the AfroBasket tournament in Uganda. They asked the Women’s commission and other relevant parties to step in and help improve their situation in Dakar.

Recently, the men’s team represented the country well during the Fiba men Africa Cup of Nations in Bamako, Mali.

The Morans went against all odds to make it to the finals of the tournament they were participating in for the first time.

After the promise the Morans showed in Bamako, it was clear that Kenyan basketball has quality but just lacks the support.

Just like their women counterparts, the Morans travelled to Bamako without sponsorship from the Sports Fund.

The team was able to travel to Bamako for the tournament courtesy of a sponsorship deal the local basketball governing body made with Badoer Investments.

In fact, the kits the players used in the tournament was sponsored by a member of the team.

The lady Morans are set to play their last match in the tournament against Angola on Tuesday. They have already lost two matches against Mozambique and Ivory Coast.

The mechanic, who hails from Kisumu County, predicted four corners in four different matches on…

SportPesa’s website is back. Many have noticed as many stopped trying to log into the site after the company closed its Kenyan shop.

In the wake of the Coronavirus outbreak that has rendered the sporting scene dormant, the latest trend in the betting scene is virtual betting which is the talk of the town among punters.