President Uhuru Kenyatta speaking during the televised address where he announced intervention measures to cushion Kenya's economy. The National Security Council has approved partial lockdowns in the Nairobi Metropolitan Area and the Coastal Counties of Mombasa, Kilifi and Kwale. [ Photo / PSCU ]

The government has announced the rollout of high-speed internet across the country to boost efforts to have Kenyans work from home, as the Coronavirus pandemic threatens to bring the country to a halt.

President Uhuru Kenyatta today said Kenya has approved Google Loon Services to enable universal 4G data coverage in the country to mitigate disruptions caused by the global Coronavirus pandemic that has seen many people work from home to avoid contracting the respiratory illness.

Speaking at State House in Nairobi on Monday 23rd March, President Kenyatta announced that the Kenya Civil Aviation Authority (KCAA) had signed an agreement with Google Loon to allow its balloons to fly over the Kenyan airspace beaming high-speed internet.

“In that regard, and to foster communication and enable Kenyans to retain and enhance remote access to the offices and enterprises, My administration has granted approvals that will ensure universal 4G Data coverage throughout Kenya,” said the President when he briefed the press at State House Nairobi.

While saying Google was deploying the technology free of charge, he was not explicit on whether Kenyans would be charged for the service.

The balloons host 4G base stations and have the capacity to provide wider signal coverage. The Loon service uses balloons, which are powered by an on-board solar panel, to provide Fourth Generation (4G) coverage to areas with lower population densities.

They float at 60,000 feet above the sea level, well above air traffic, wildlife, and weather events, Loon said.
“This intervention will enable Kenya to retain her competitive advantages in ICT and innovation in the midst of the current crisis; while at the same time laying the foundations for greater expansion once the current health challenge is contained,” he said.

Telkom Kenya Ltd and Google Loon will start the commercial rollout of a 4G data network in the country as soon as the balloons are available on the Kenyan airspace. The two companies have been testing this service for the last two years.

The service will enable Kenyans to enjoy access to high-speed and affordable internet services.
President Kenyatta also lauded Google Loon internet and Telkom for offering their 4G service towards supporting the government’s surveillance and management of Covid-19 infections.

“Indeed, access to these services will keep Kenyans connected to emergency services and to their loved ones, whether isolated or in quarantine, or whether working from home or at the usual workplaces,” he added.
The service is also expected to enable teachers and students to access education materials remotely and continue learning from home.

President Kenyatta further thanked Google Loon for offering the service without levying any charges saying it was a true testament of the partnership between the government and the private sector.

SEE >> What is Driving the Fourth Industrial Revolution

Last year, Alphabet Inc’s Loon said it would deploy its system of balloons to beam high-speed Internet access with Telkom Kenya to cover rural and suburban populations, marking its first commercial deal in Africa.
Known as Project Loon, the technology was developed by Alphabet’s X, the company’s innovation lab. It has since become Loon, a subsidiary of Alphabet, which is the parent company of Google.

The technology was used by U.S. telecom operators to provide connectivity to more than 250,000 people in Puerto Rico after a hurricane last year. With more than 45 million people, Kenya’s major cities and towns are covered by operator networks, but vast swathes of rural Kenya are not covered.

Ground stations for Loon had initially been identified at Nyeri but regulatory approvals had not been issued by KCAA and the Ministry of Transport.

NEXT >> Interest-Free Loans to Take You Through Covid-19 Crisis 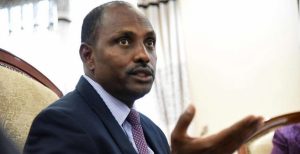