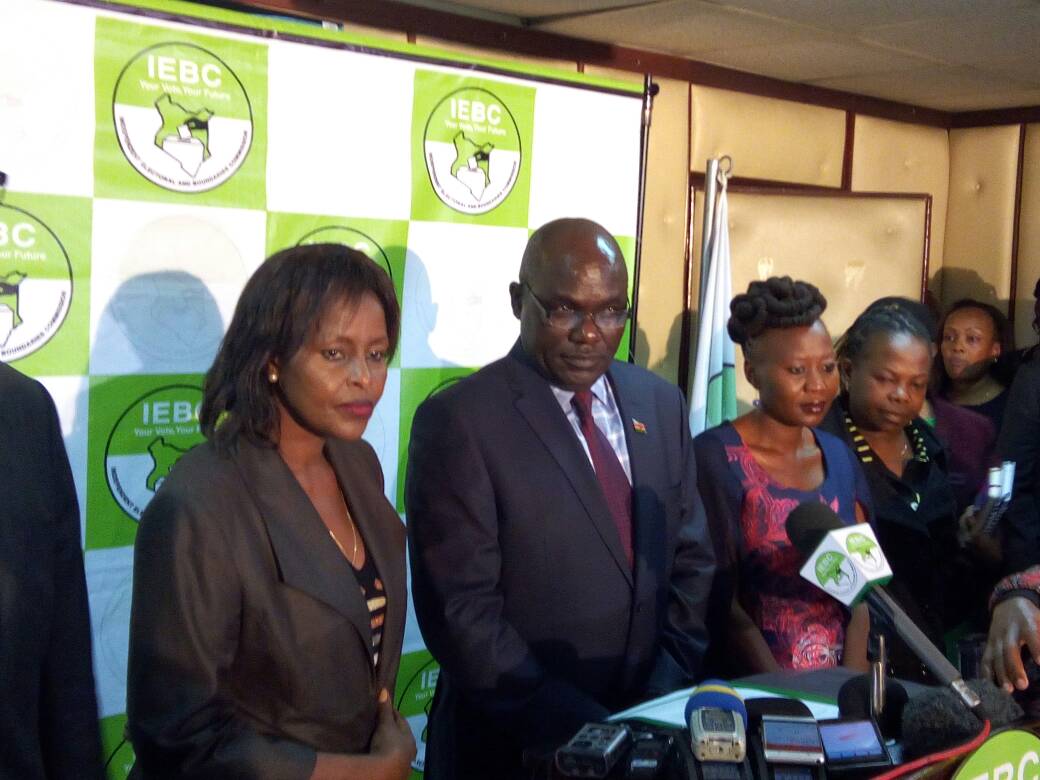 The conflict at the Independent Electoral and Boundaries Commission (IEBC) boiled over on Monday after half of the current commissioners resigned “with immediate effect”.

IEBC vice chairperson Connie Nkatha Maina and commissioners Margaret Mwachanya and Paul Kurgat said they had left the commission because they have no faith in chairman Wafula Chebukati and his leadership.

Under Mr Chebukati’s leadership, they said, “the commission boardroom has become a venue for peddling misinformation, grounds for brewing mistrust, and a space for scrambling for and chasing individual glory and credit.”

The commission, which has been at war since the lead-up to August 8, 2017 elections, has become dysfunctional due to external interference, the commissioners said in a statement read by Ms Mwachanya.

“For too long and way too many times, the commission chair has failed to be the steady and stable hand that steers the ship in difficult times, and gives directions when needed,” the three IEBC chiefs said

While the trouble in the commission has been simmering since the nullification of the August 8 elections, it is the suspension of the chief executive Ezra Chiloba 10 days ago that broke the camel’s back.

Mr Chebukati made the decision with the support of commissioners Abdi Guliye and Boya Molu.

Ms Nkatha and Dr Kurgat walked out of the meeting in protest while Ms Mwachanya was away.

While insisting that they were not against due process in the case against the CEO, the three said Mr Chebukati failed to follow the due process.

“The removal of a CEO is a weighty matter, and is one that should not have been introduced as a by-the-way,” the commissioners said in reference to the argument that Mr Chebukati had ambushed the other commissioners with the agenda.

Equally, they said, the meeting should have taken place when all commissioners were in the country, referring to Ms Mwachanya who was in Dubai at the time.

While Monday’s resignation by half of the IEBC team was the big news, it has been long coming.

It started days to the October 26 repeat election when vocal commissioner Roselyne Akombe resigned, saying the commission had become a competition of political interests.

“It has become increasingly difficult to continue attending plenary meetings where commissioners come ready to vote along partisan lines and not to discuss the merit of issues before them. It has become increasingly difficult to appear on television to defend positions I disagree with in the name of collective responsibility,” said Dr Akombe in her statement announcing her resignation.

So did the trio think they duped Kenyans to an election with a heavily divided commission they did not believe in even after Dr Akombe had warned about it?

“Absolutely not,” Ms Nkatha said. “We had a wonderful, wonderful elections.”

The only problem, Dr Kurgat said, “was the last 10 days.”

In the run-up to the repeat presidential election, in what became like a farce, internal memos started leaking from the commission.

READ: Editors Guild to hold elections to avoid being deregistered

And commissioners led by Ms Nkatha ganged up against Mr Chebukati and disowned one that the chairman sent Mr Chiloba.

This, among others, split the commission almost down the middle, with the vice-chair leading one camp, and the chairman backed by, sometimes, Prof Guliye and Mr Molu and, in some others, by Ms Mwachanya.

“Given this severe deterioration of confidence in the commission chair, we find our position as commissioners under his leadership no longer tenable,” they said.

“Consequently, we regret to announce our resignation from the commission with immediate effect.”