DP Ruto and his family being prayed for at the prayer altar opened in his Karen residence . Photo/Twitter

The church which was launched on Wednesday by Dr Ruto and his wife Rachel Ruto has been under construction since August 22, 2018 when the DP laid the foundation stone.

Mrs Ruto took it to the social media platforms to express gratitude for the construction of the altar and quoted the Bible while at it.

Today, my husband the Deputy President and I were blessed to have been joined by Fathers of Faith and key leaders in various mountains of influence during the opening ceremony of our National Prayer Altar at the Official Residence of the Deputy President. pic.twitter.com/JrrhNRhDCU

And "David built there an altar to the LORD and offered burnt offerings and peace offerings. Thus the LORD was moved by prayer for the land, and the plague was held back from Israel" (2 Samuel 24:25) pic.twitter.com/TOenl8mZcR

The Deputy President has been on the receiving end of some leaders who question his constant presence in church functions and generous donations during harambees.

However, Mr Ruto has brushed the the comments off maintaining that he will not stop supporting the work of God.

His wife is also known as a convener of religious gatherings meant to pray for the country. 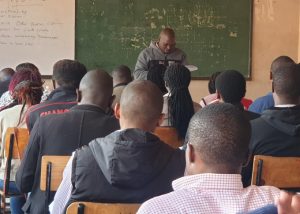