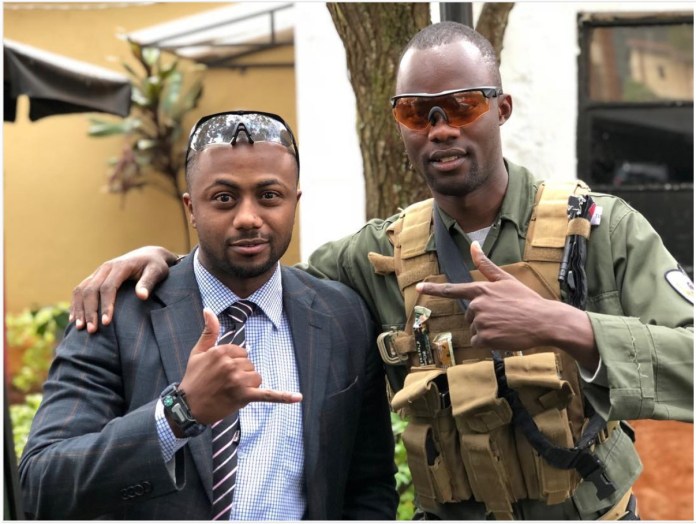 Monica Kimani murder suspect Joseph Irungu with GSU officer Jennins Orlando, who was also suspected to have taken pat in her murder.

Crime stories dominated news reportage in the country in the last eight months, a new report shows spotlighting a duration during which Kenyans were saturated with news of several incidents of famicides, among other shocking killings.

The Kenya Media Landscape Report released on Wednesday by Reelforge in conjunction with TIFA Research, says that apart from crime, the period the media also predominately focused predominantly  stories related to education, corruption and
national politics.

“Crimes reporting was dominated by stories such as the murders of Sharon Otieno, Monica Kimani, Caroline Mwatha and Ivy Wangeci. The Riverside Drive Terrorist attack in January 2019 received significant coverage in the Kenyan media and this
is classified under crime,” the July 2019 report states.

Similarly, the murder of Mwatha, a human rights crusader, who is suspected to have been a victim of a police extra-judicial killing and Wangeci, who succumbed to an attack by a stalking admirer at Moi University’s School of Medicine also attracted considerable coverage.

On education, the top stories focused on the national examinations, the new curriculum, the threats of the teachers strike and form one students placement.

“The media extensively reported on corruption with a critical focus on
graft within national and county governments. There was also a focus on national politics with the most news & editorial items focusing on the handshake and 2022 presidential elections,” it says.

On crime, Interior Cabinet Secretary Fred Matiang’i gets the highest coverage due to his mandate around interior security. His mentions focused on the Dusit Terror Attack and fake gold scam while President Uhuru Kenyatta is mentioned under this theme focused on his remarks around the Dusit Terror Attack and his impersonation. The murder of Mwatha received 7.91% of the total mentions.

The mention of Cabinet Secretary Amina Mohammed, now in Sports and National Heritage, under education is linked to release of national exams results, students placement and the new curriculum.

In reference to national politics, Deputy President William Ruto has the highest coverage at 27.88% followed by Uhuru at 20.76% and Opposition leader Raila Odinga at 18.04%. The coverage around these personalities has been on 2022 politics and the handshake.