Emeritus Archbishop Raphael Ndingi Mwana ‘a Nzeki. He survived a plague that disrupted learning resulting in closure of the school where many students, priests and nuns died. [Photo/Nairobi News]

He was the last born of Maria Muthoki and Joseph Nzeki Ngila. He was brother to Paul Muli, Veronica Kavenge, Ann Muluu and Teresia Katunge.

Education and Journey to The Priesthood

During that time the Kambas had not yet embraced western education as a way of bringing up the youth, especially for boys. Herding cattle was their main occupation.

The government therefore made it mandatory for each family to volunteer a son to go school or suffer a fine of one cow. Mzee Nzeki, wanting to escape the fine, volunteered a son to go to school.

However, this son did not take up the position, so Mzee Nzeki offered Ndingi as a replacement in order not to suffer the dreadful fine of a cow.

And so off Ndingi went to Myanyani Holy Ghost Primary School, and later to Kabaa. While at Kabaa, a plague came upon the area, disrupting learning and resulting in closure of the school. Many students, priestsand nuns died. Miraculously, Ndingi escaped the sickness. He continued his education at Etikoni and later proceeded to Kabaa High School for Form one and two.

After Kabaa he proceeded to Kilimambogo Teachers’ College from which he graduated as a P3 teacher in 1950. Young Ndingi taught for while then proceeded to Kibosho Seminary, Moshi, Tanganyika (now Tanzania) to study Philosophy and later to Morogoro senior Seminary for Theological studies where he qualified to be ordained as a priest.

He was ordained as priest at Kabaa parish on the solemnity of Mary the Mother of God, on 1st January 1961 by Archbishop J J McCarthy CSSp.

He was the first Kamba to be ordained as a Roman Catholic priest.

Service in the City and Study in The US

One initiative that stands out was their setting up a hostel for young men and women, most of them recent arrivals from the countryside, and who had no accommodation in the bewildering and confusing City of Nairobi.

Religious Sisters such as Sr. Edel Bahati and Sr. Martin Wanjiru helped the Njenga/Ndingi team establish the hostel near the parish compound.

The young priest was instrumental in the establishment of Forms V and VI classes at Mang’u High School and Loreto High School Limuru. Sr Colombiere Kelly IBVM still recalls Fr Ndingi arguing with senior officials who were reluctant to grant ‘A’ Level classes.

The Loreto educationist reports that she has never seen an angrier priest. When they finally left the Ministry of Education HQs on that ”dies irae” that is “day of wrath”, Fr. Ndingi had a letter in hand, permitting Loreto Limuru to open a Form V class the following year.

In those days, Fr. Ndingi served as the Catholic Chaplain at Starehe Boys’ Centre and worked very closely with Geoffrey Griffin, Founder and Director of Starehe. Theirs was a professional partnership that lasted a lifetime.

After returning brilliant results in his Cambridge School Certificate as a private candidate, Fr. Ndingi began preparing for his ‘A’ Levels, again self-taught.

He did not sit for these exams simply because Archbishop McCarthy got him a scholarship to proceed to St. John Fisher College, New York, for university studies. There he majored in History and Political Science. Besides earning his degree, Fr. Ndingi made good friends with whom he has maintained communication all these years.

No sooner did he return to Kenya than he was appointed first bishop of the Diocese of Machakos by Pope John Paul VI. It was a historic moment when the Holy Father ordained him to the episcopacy among several African bishops in Uganda in 1969.

During his time of service in the new diocese, Bishop Ndingi distinguished himself as a champion of good African customs and an enemy of evil practices.

One lasting memory of his Machakos years is that he told off politicians who tried to bribe and force innocent citizens to vote for them in the 1969 general election. This strong stand against evil was just a foretaste of things to come. The political class had seen nothing yet!

The Holy Father transferred Bishop Ndingi to Nakuru, to the displeasure of many folks in Masaku. The loss of Machakos was gain to Nakuru.

Remarkable memories of Mwana ‘a Nzeki in Nakuru include: contribution to the development of agriculture including Baraka Farm, sinking of boreholes, establishment of the Diocesan Pastoral Centre, courageous defense of oppressed people during the infamous tribal clashes.

There are many witnesses on this including his driver Samson Mwangi and Fr. Francis Mirango.

For a decade Archbishop Ndingi was the shepherd of the People of God in this Archdiocese. Even without trying, what will we remember him for?

Many professionals, religious sisters, brothers, priests and bishops know the role of Archbishop Ndingi in their life and vocation.

During his time at the Archdiocese of Nairobi, he ordained 56 priests.

One recalls his intervention in conjunction with Dr. Wilfred D. Kiboro and the Nation Media Group, among others, when many parts of our country were struck by a serious drought in 1999. Archbishop Ndingi Mwana ‘a Nzeki championed an effort that focused on bringing relief to hungry citizens and also sought to find a permanent solution to the challenges of hunger and thirst.

Here lies a good man of God was capable of anger and did not suffer fools. At the same time, he had a good sense of humour.

Fr. Lawrence Njoroge of the Archdiocese of Nairobi recalls congratulating His Grace for his wonderful swimming skills. Fr. Njoroge added: “Your Grace, you are lucky to have been born near the Athi River and learning to swim at an early age”.

The Archbishop immediately shot back: “Let me correct you, Fr. Lawrence. It is not the Athi River that swims. Rather, it is Ndingi Mwana a’ Nzeki who learnt to swim in the flowing waters of the Athi River”.

After his retirement he spent a quiet peaceful life at the Clergy Home inprayer and hosting visitors who often came to seek counsel from him. 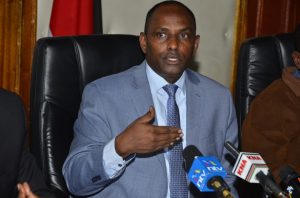 Recovery of Kenya’s Economy Will Depend on Superpower Countries, Says Budget Office
PBO proposes additional measures to cushion Kenyans who do not…