Daniel 'Churchill' Ndambuki was awarded the golden play button for being the first Kenyan to reach 1 million subscribers on Youtube. Photo: Twitter

Kenya’s most-followed comedy, Churchill Show, has been rewarded by Google for having the most subscribers on Youtube.

Other vloggers who were feted at the event include the WaJesus Famil, Joanna Kinuthia, Wabosha Maxine, Alex Mathenge and Waniz Sharon.

The awards are given to YouTube content creators when they attain a certain number of subscribers. The video-sharing platform awards the Youtubers for the different levels of achievements they have made.

Churchill Show was the only channel to be feted with a Golden play button at the event held by Google on Wednesday at Movenpick Hotel and Residences in Nairobi. The other channels were awarded the Silver play button.

The Creator awards were presented to them by Amb. (Dr). Amina C. Mohamed who is Kenya’s cabinet secretary sports, culture and heritage together with Charles Murito who is the Google Kenya Country Director and Dorothy Ooko, Africa PR Lead for Google.

Churchill Show has gained popularity over the past decade and has been a stepping stone for many Kenyan comedians. Through the show, Daniel Ndambuki has mentored and grown renowned comedians including the likes of Chipukeezy and Eric Omondi.

The YouTube Channel gained its following through snippet videos of different comedians who stood out.

The host of the show could not hide his joy as he took to social media to thak fans and the Churchill show family for the milestone achieved. 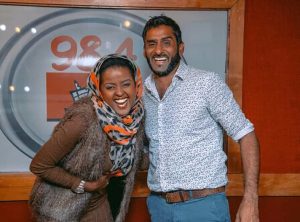 Amina Abdi and Fareed Khimani set for 1st radio marathon in Africa
If they hack the 28-hour feat, the duo will clock…