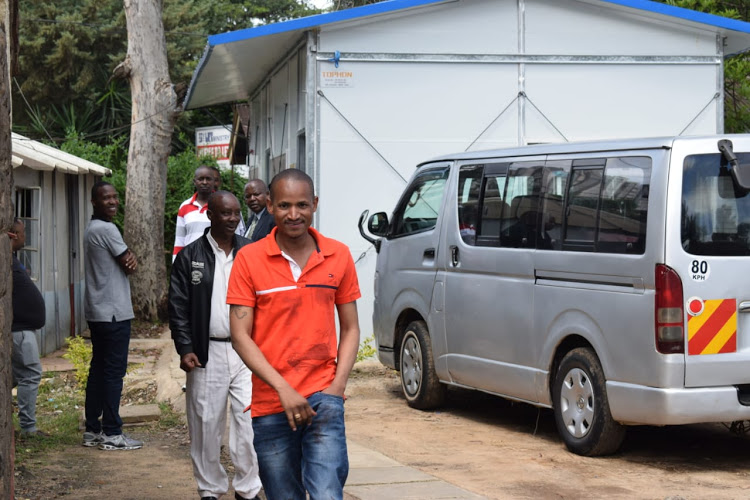 Embakasi East MP Babu Owino at Kilimani Police Station where he was quizzed on the shooting incident that happened at B Club in Nairobi. CCTV footage showing the MP shooting the victim has emerged. {Photo: The Star}

CCTV footage from the shooting incident that occurred at B Club involving Embakasi East MP Babu Owino has emerged.

The video first published by K24 TV shows the MP dressed in an orange t-shirt smoking sheesha before the DJ approaches him to show him something on his phone.

The MP then draws his firearm and shoots DJ Evolve whose real name is Felix Orinda. The other revelers scramper for safety as the victim lies down.

The MP then appears to be unbothered by his actions despite everyone else being shell-shocked by the incident.

The edited footage then shows Babu Owino and another man pulling the victim out of the club in what seems like an attempt to take him to hospital.

Earlier, Director of Criminal Investigations George Kinoti had said he will charge Babu with attempted murder saying that the evidence at hand was irrefutable.

“We are going to charge him with attempted murder. It is clear that he wanted to kill the man,” Kinoti told journalists on Friday.

On the other hand, Babu Owino’s lawyer, Cliff Ombeta says that his client’s actions are ‘understandable’ since he was approached in an unfriendly manner by a person he considers his friend.

“He (Owino) was approached in a non-friendly manner by someone he considered a friend and a physical fight ensued,” Ombeta told journalists.

Ombeta further told the press that Babu had reported at the Parliament Police Station that his life was in danger and has been looking over his shoulder at every turn.

Meanwhile, reports indicating that Orinda is dead are untrue. He is alive and is recuperating at Nairobi Hospital.