Kenya’s Betsy Saina has become the second Kenyan woman (after Eunice Kirwa) to win back to back titles of the Marugame Half Marathon after winning this year’s edition on Sunday. Japan based Kenyan, Simon Kariuki finished second in the men’s race behind Ethiopia’s Abdi Nageeye.

Saina had ran together with Japanese debutante Ayuko Suzuki until the 20 km mark when she started to pull away from her competitor. Both ladies reached 20 km in 1:04:25 but Saina pulled away from Suzuki to win the race in 1:07:49 smashing her previous best of 1:09:17 set in Marugame last year. Her time is also the third best in the International Association of Athletics Federation (IAAF) Silver Label road race. Australian 41-year-old Sinead Diver finished third in 1:08:55, improving her half marathon best by 25 seconds.

Saina couldn’t hide her excitement as she took to twitter to celebrate her victory and also hinted to participate in this year’s Boston Marathon.

“Kicked off my season today with a PB! Excited to head back for more training before the big race @bostonmarathon! Grateful for the opportunity,” she tweeted.

Second placed Suzuki was still pleased with her 1:07:55 half marathon debut despite missing out on victory. “I am bit disappointed to be out-kicked at the end of the race, but it was good that I was able to keep the steady pace all the way,” she told IAAF.

In the Men’s race, the lead group went through 5km in 14:16 and then Kariuki pulled away from the pack. He maintained the lead until reaching 20km in 57:18 after which Nageeye reeled in and pulled away from the Kenya winning the race in 1:00:24, improving his personal best by one minute and 44 seconds. Kariuki finished second in 1:00:43, a personal best by 42 seconds. Australia’s Jack Rayner was third in 1:01:36. 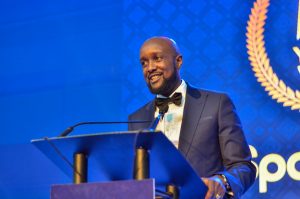