Kenyans are trying out every means to counter the common enemy in Covid-19. The virus seems to be here with us for a longer period than anticipated. With malls, shopping outlets and restaurants slowly coming back to normalcy, there’s a false imagination of the virus being contained.

With all this anxiety, Kenyans have resorted to creative ways of living through these tough Covid-19 times. Working from home, attending meetings virtually and even church services being conducted without congregations have become the new normal.

Exercise is the latest trend that is being observed keenly. This is after the World Health Organization (WHO) Health Cabinet Secretary Mutahi Kagwe urged Kenyans to eat healthy foods and exercise to boost their immune system in order to fight the virus. Many have taken it seriously and it is common to see people jogging in the early morning hours in groups.

Joblessness and shut-down businesses remain a reality. Idleness during isolation has been creeping in, resulting into many domestic violence and sexual abuse cases across the country.

Many are embracing the idea of exercising to do away with idleness and at the same time keep fit during this pandemic. People are now aware of the importance of physical and mental health through exercise and are taking up regular physical activities to boost the immune system.

Mr Kagwe said people with a higher level of immunity had speedy recovery rate from Covid-19 compared to those with a lower immune system in the event of an infection.

In Kayole, East of Nairobi, you can spot people, both men and women, jogging in the morning. This is being replicated across many estates as they look for the best gyms in Nairobi.

Henry Mumia, a fitness instructor at a gym in Kayole, said subscription to his aerobics classes and jogging sessions had increased. “I now have a class that is triple the number I used to train,” Mumia said, 27, and a father of two. “We are now forced to split the class into groups of a sizable number that can comfortably fit in one room and maintain social distance while in session.”

He said they assemble outside the gym very early in the morning, jog from there to Donholm and back and finish the routine in the gym with aerobics or zumba class depending on the day.

Some of Mumia’s regular members include Winfred Tahabu, Detrimental Chobani, Esther Wambugu and Esther Karimi, who have been consistent. They say the daily exercise routine has helped them lose weight after shredding off some fat. They all weighed over 90kg but now boast less than 70kg three months later.

“Exercising wasn’t my daily cup of tea but I can now confidently say that it’s a daily routine, I have made it part of me,” said Winfred Tahabu, who runs a business in Kayole.

Her colleagues, including Cetrine Chigani, are now ardent fans of the sessions. “I had a lot of baby fat after the birth of my daughter, but after I decided to exercise to boost my immune system and avoid obvious infections during this pandemic, I have cut almost 20kgs. It has really boosted my immune system and my self-esteem as well,” said Cetrine who works at Greenspan Mall.

With Covid-19 infections on the rise, Kenyans will to adopt a new lifestyle and embrace guidelines issued by the government which include washing of hands regularly with soap and water, maintaining social distance, eating healthy and exercising regularly.

NEXT READ >> Farmers Beat Lawyers and Journalists in Sexual Performance 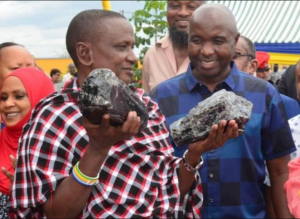