Barely three days after appearing in court alongside his two wives over the Ksh 122 million scandal at the Government Advertising Agency, Lugari MP Ayub Savula’s problems continue piling up.

In an advert placed in a section of the press on Wednesday, Valley Auctioneers put up for auction a parcel of land measuring approximately 22.06 hectares or 54.49 acres in Ilemit, Kajiado county.  It belongs to the MP. Going by the land prices in the area, the land could be worth about Ksh 55 million.

In 2011, there was another attempt to auction another parcel of land in Karen, whose title he had used to borrow Ksh 15 million from a local bank to buy a Range Rover. He survived.

The auction, which will happen on November 21, is being seen as a sign of a change of fortunes for the formerly high-flying MP, who at one time used to overfly the Kakamega Golf Hotel to the inconvenience of patrons, including Cabinet ministers and MPs, as his chopper blew up dust on them.

Shortly after being elected to the National Assembly, the MP, known for living large, acquired a brand new custom-made S500 Mercedes Benz at a reported Ksh 22 million.

However, two years ago, there were reports that he was broke after he borrowed Ksh40 million to take his two wives to Dubai for holiday. He, however, denied the reports, claiming his political detractors were the ones circulating them.

At the time, staff at the Sunday Express, which he owns, revealed they could not enjoy the festive season due to non-payment of salaries.

Since he was elected, Savula has been dishing out money to Kakamega residents at public functions, including burials, as he eyes to dislodge Governor Wycliffe Oparanya.

But this week, one Sammy Aina Washiko posted a photo of bundles of Ksh 1,000 notes on Facebook as he bragged how he secured his freedom after he was charged over the GAA scam.  This could, however, be because he and his wives could not settle the bail in person as they were behind bars.

The MP also took plea on his behalf as well as the seven companies, hence is required to pay an additional Ksh 500,000 for each of the said companies.

READ: RUTO TO KNOW FATE OF WESTON HOTEL BY FEBRUARY

He wrote: “I had to cancel all my weekend and Monday engagements just to stand with my brother Hon. Ayub Savula. Many thanks to all who played a part led by our leaders Hon. Musalia Mudavadi, Governor Oparanya, Hon. Benjamin Washiali, Hon. Wangwe, Hon. Shinali and many others who contributed a surplus that included my Sh1m personal contribution. God bless you all.”

Here is the advert: 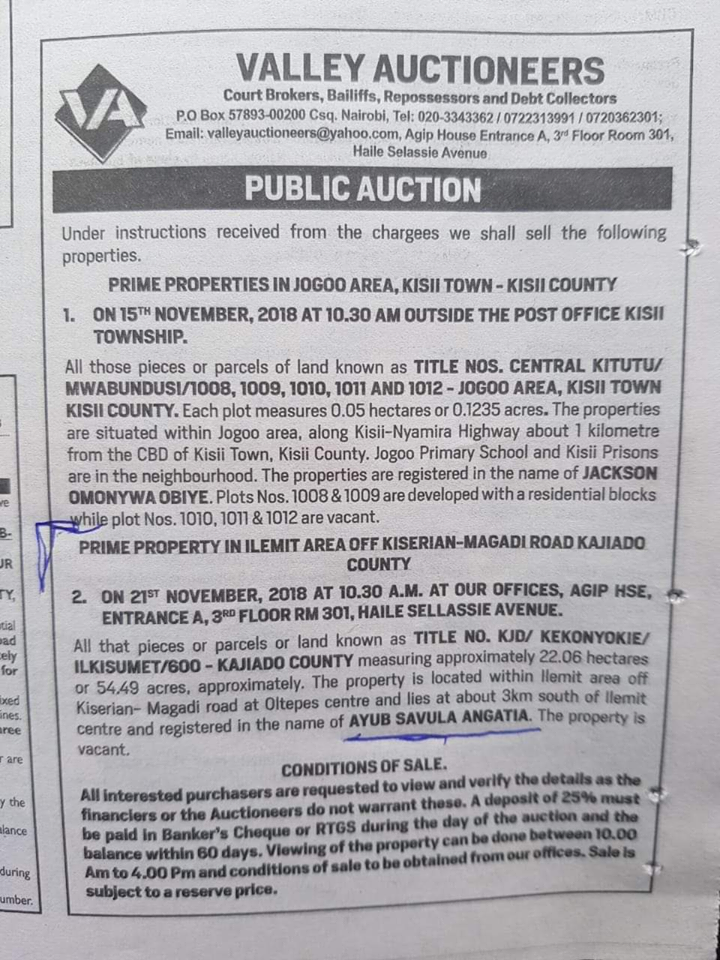