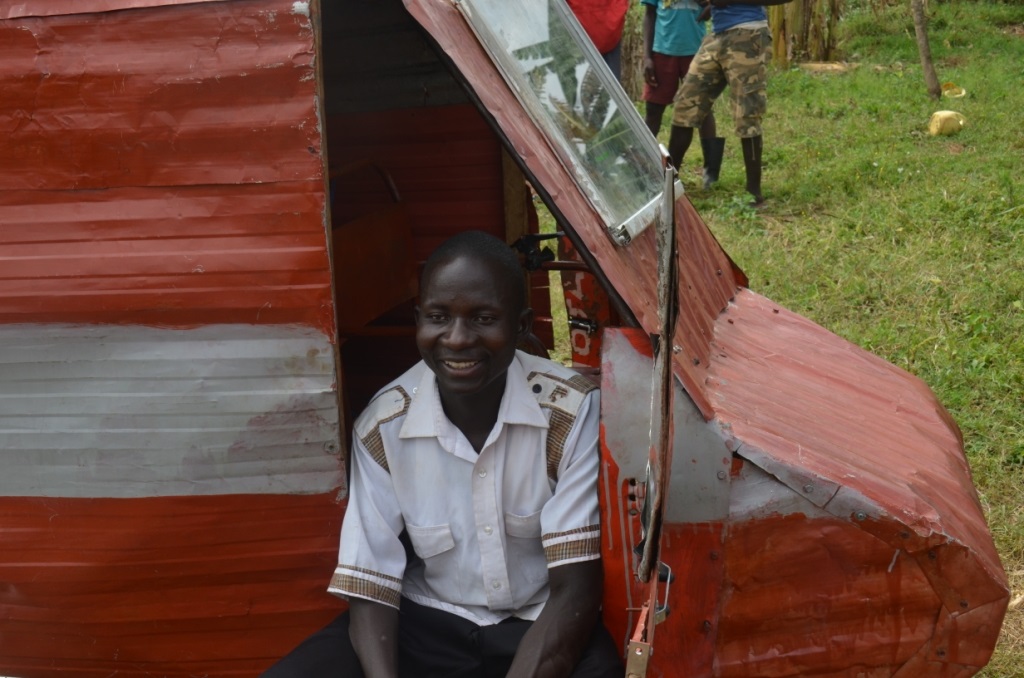 [dropcap]F[/dropcap]riends and fans of Spaphoud Ochieng Okinyi identify him as a polite and talented young man in all spheres of life. But to other Kenyans meeting him for the first time, he is just a cartoonist and a comedian.

Yet Okinyi is a serious up-coming engineer going by his in-born talent that has enabled him assemble a ‘helicopter’ that is currently attracting throngs of viewers at his home from within and far flung places. A trip to his Ng’ong’a village, in Uriri sub-county in Migori reveals another side of the 28-year-old man whose part of life after school involves dealing in scrap metal.

When KNA visited him at his ‘state-of-the art’ garage within his father’s compound, we found him putting the final touches to his helicopter. “It has been my dream to manufacture an airplane, and this is the fruit of my long journey in my engineering work,” he joyfully told us while showing us his art-work.When his father Boniface Onyango died, he was left with no option but to drop out of school at Lwala Mix Secondary School in form two due to lack of school fees. He was then to engage seriously in the business of collecting and selling scrap metals which was not paying him well.

The father of two says that while in school, his best subject was physics from where he learnt of the “pressure one and two” that enables plane to fly. This, he explained, triggered his urge to put this theory into practice and in a span of four years, he has gone full throttle into the engineering work of his current plane.

“The body work and the engine took me two months to assemble at a cost of Ksh80, 000 and my focus is now to launch it in the air as soon as possible,” says Okinyi.

From his savings from sales of scrap metals, Okinyi bought a motorcycle engine at Ksh20, 000 and the body works of the plane has gobbled Ksh60,000 so far. Okinyi works with his co-engineer, Joshua Otieno, who is the brain behind the electrical installations.

Otieno, a standard 7 pupil at St Mary’s Ng’ong’a academy, says their helicopter would fly by all means.  Complete with a motorcycle engine, the single-seater helicopter will fly on normal super petrol, although the two ‘engineers’ are working on ways to make it use the more litter jet fuel.

The body is a fabrication of normal iron sheets joined carefully to create a cabin for one person. And jutting from the roof is a steel rod holding three pronged blades made of compacted iron sheets- making a powerful propeller to complete the plane.

The undoing, however, is that the engineering work has not put in a strong body work for the helicopter to sustain the power of the engine. “When we try to fly the plane, the fear of it crumbling on landing is great and that’s why we have been aborting complete take-off to save the pilot and the plane,” says Okinyi with an assurance that the plane could lift high from the ground.

Known in the tiny village by the title Engineer, Okinyi and his co-engineer have called on the government and any other interested person to assist them with funds to enable them improve on their work and talent. “It is only lack of funds that has made us to use cheap materials that cannot sustain the plane in the air,” emphasised Okinyi who says he has the passion for engineering work.

His mother Turphosa Onyango affirmed her last born Okinyi had the passion for engineering and could go far if assisted. (KNA)