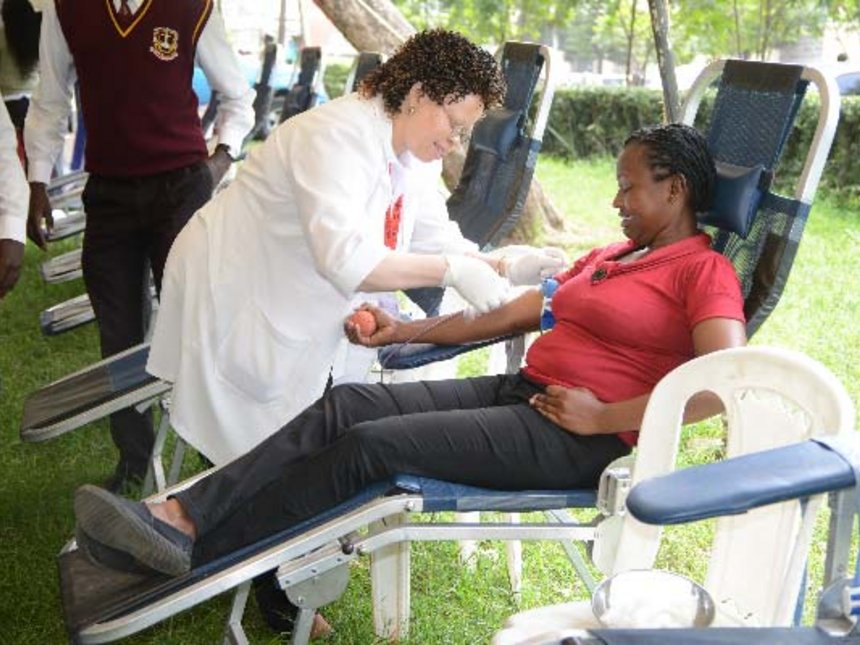 The Kenya National B***d Transfusion Service (KNBTS) will conduct a one-day national b***d donation campaign aimed at increasing b***d stocks so as to save lives and alleviate human suffering. The campaign, dubbed the ‘Valentines b***d donation drive’ will be conducted in 22 b***d donation sites across the country and will target a***t b***d donors of between the ages 18 and 65 years.

The campaign, whose theme is, “Show your love, donate b***d” is expected to garner over 10, 000 units of b***d and to reach over one million people with information on the importance of b***d donation. All b***d donors will receive a red rose that signifies love of life.

The Ag. Director of KNBTS Dr Josephine Githiga said Thursday that the initiative is aimed at providing a platform for Kenyans to demonstrate their love by giving b***d, which is a priceless gift to someone they may never know or meet in their life time.

In Nairobi, the main event will be held on Valentine’s Day Wednesday, February 14, 2018 at KICC, COMESA grounds from 6.00am -10pm and will be open to the members of the public.

READ: Got sperm? You can donate some at a fee

“This campaign has been necessitated by the continuous need for b***d in our health care facilities and the desire to ensure that Kenyans are secure in case they suffer illnesses that may require b***d transfusion,” Dr Githaiga said.

A research conducted recently by the b***d agency indicated that a***t b***d donors were more reliable and responsive than those in learning institutions. The government collected a total of 149, 642 units of b***d last year, representing 83.1% of the annual target of 180, 000 units.

SEE: One easy way to improve your l****o

The national requirement, according to the World Health Organization (WHO) standard, is 400,000 units, presupposing that if 1% of the entire population donated b***d once in a year, the country is considered b***d sufficient.

This scenario could be attributed to the poor b***d donation culture among Kenyans and in some instances gross lack of awareness among potential donors. Dr Githaiga said that b***d donation apathy among a***t donors has resulted to low collections while the same segment of the population was the highest recipient.

“ KNBTS has adopted a strategy of using information, e*******n and communication to create a culture of regular voluntary b***d donation.”

In Kenya 2 of every 3 units of b***d are transfused to mothers and children and it is unfortunate that the country has a relatively high maternal mortality ratio compared to the western world at 362 maternal d****s per 100, 000 live births, according to the Ministry of Health 2018, translating to about 20 women dying every day from child birth related complications.

Dr Githaiga says that demand for b***d and its products is growing owing to the sporadic t****r a*****s, road traffic i******s, c****r d******s and anemia occasioned by malaria and other medical conditions. “This campaign therefore will attempt to mitigate the current scenario in an effort to offer Kenyans a more secure treatment and most importantly to save lives,” she added.

Meanwhile, the government is promoting repeat b***d donation culture through Pledge25 Kenya Club where members commit to donate b***d at least 25 times in their lifetime.

NEXT: 10 ways to control high b***d pressure without using d***s