Winnie Biwott, Twende Co-Founder and COO. She says that Twende targets to make long distance travel easier for both passengers and drivers. [Photo/BT]

It is that time of the year again when long-distance travel becomes a headache for many.

As if in synchrony, travelling in peak seasons in Kenya has always coincided with little money and huge demands as people seek to spend time with their loved ones.

However, when travelling to rural areas, which are usually away from the conveniences of the city, means to get are usually a big problem.

Carpooling as a Solution

To address the unpredictable matatu behaviour which is always the norm in peak travel times, two Kenyans have come up with an innovation to help people move with ease during the festive season.

Twende Carpooling is the brainchild of Kiptoo Magutt and Winnie Biwott, the co-founders of Twende Carpool App which connects drivers with empty seats to passengers travelling in the same direction.

What Twende does is allowing drivers travelling to a certain place to offer lifts to people headed in the same direction but at a fee.

A quiet revolution is taking place in Kenya is targeting the chaotic matatu industry and several players have been testing the waters.

The likes of Egyptian-owned SWVL and Safaricom’s Little Shuttle are the biggest shakers of the industry which has been resting on its laurels in offering substandard and disordered services.

But Twende’s approach is for a different calibre of travellers and drivers.

Biwott who is also the company’s COO says that Twende is meant to encourage people to share and thus decongest the roads.

During the peak season travel times like Christmas or Easter, Twende is supposed to give travellers the option of choosing between a matatu or a private car.

Biwott says the idea behind Twende as born out of necessity. Having experienced the challenges of travelling to the rural areas during the rush, the cofounders thought it prudent to come with an idea where drivers could cost-share the trip costs with travellers who would hitch a ride with them and occupy the empty seats.

“There are people who would like to rideshare and we want to make it very easy for those interested. For instance, can I connect with a driver in my area who could take me to my rural home when I am travelling there?” says Biwott.

With their tagline being Carpooling made fun, Twende works towards making the experiences of both the driver and the passenger exciting.

In a country where sharing cars with strangers is not the norm, Biwott says that they couple drivers with passengers they have similar interests with usually. While it is still in its formative stages, Twende says that their pricing strategy is aimed at encouraging stakeholders to travel in relative comfort.

While the driver gets to share the trip costs like fuel, the passengers get to travel in relative comfort with an assurance that they will get to their destination.

“We want to make this affordable to as many people as possible. Despite the distance, we want a situation where the average traveller will have affordable means to get to their destination. Twende offers comparable charges as those by the matatus. This is because we are all contributing to the costs of the ride,” she adds.

Twende is not a Public Transport Service (PSV) business meaning that the drivers are not in the business of moving people from one place to another.

At the moment, the company is working on ensuring that all the ride sharers get insurance for their trips. This is to eliminate the possibility of losses during the travel times within the Twende app.

The company targets being the mainstream of ridesharing by ensuring that travellers can get a ride anywhere they are.

“We’ve local and international investors to allow us to expand our dream. Looking forward, I’d describe success as being able to connect drivers to ride sharers anywhere in the country and doing this smoothly in such a way that no one would lack a ride,” Biwott concludes.

Regarding safety, Twende says, “On our platform, you choose who you travel with based on their verifiable profile. We use real-time location tracking to monitor trips. Our support lines are also available daily 9am to 5pm to answer any queries you have.”

Read >> Brighter Side: Why are Matatu Makangas Always Happy? 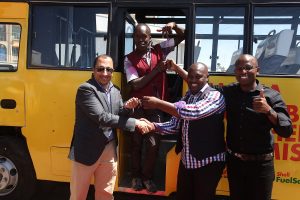