Nearly three months after making a shock exit from KTN News, popular anchor Betty Kyalo has announced she will make a comeback to the screens on November 23.

Fans of Kyalo, who joined Mediamax Network-owned K24 after leaving Standard Group on August, have been eagerly waiting for her return but it appears she has been waiting for the long-awaited relaunch of the DMS Place-headquartered station, which is scheduled for next month.

Under the tutelage of Editor-in-Chief Peter Opondo, K24, and Mediamax generally, has been seeking to bolster its ranks by poaching key staffers from rival stations.

The station, which is majority owned by the Kenyatta family and Deputy President William Ruto, has also recruited the services of KBC’s Rose Gakuo and Shiksha Arora, formerly a presenter at East FM, while Karen Knaust, who had left last year has also returned to DSM Place.

A follower of the TV siren posed the question during a chat on Instagram to which Kyalo responded by indicating the date of her return. 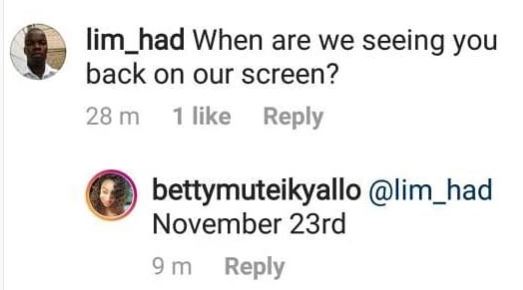 Twice last month, Kyalo was spotted at DSM Place during which she posed for photos with K24 and Milele FM presenters, among them, Eric Njoka, Anjlee Gadhvi, Mwanaisha Chidzuga, Jalang’o and Alex Mwakideu.

However, it appears she was there to put final touches to her paperwork before returning to her long vacation that has seen her tour various destinations including the Kenyan Coast and the UK.