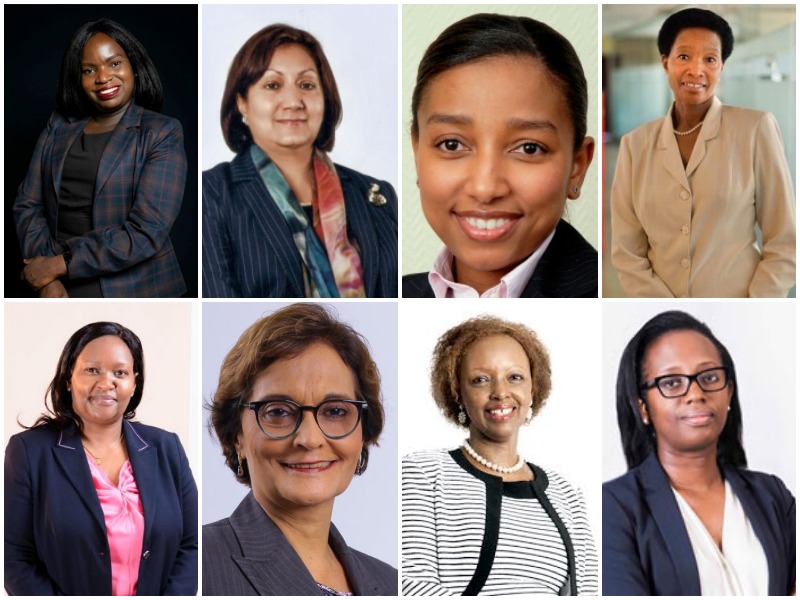 Women who hold top positions at NSE listed companies in the form of CEOs/MDs or Board Chairs. [Photo collage/Mike Njoroge]

Leadership is not the preserve of any specific gender. Despite a history that leans towards patriarchy, there have always been women within any society who stood out as leaders.

And their impact causes waves, be it Rosa Parks, Wangari Maathai, Mother Theresa, Mary, Queen Victoria or Cleopatra to name just a few. Within the corporate world, some of those examples are fewer. But they do exist in Kenya, even in present times.

Business Today has taken the liberty of looking at the firms listed on the Nairobi Securities Exchange (NSE), seeking which companies have women at the top leadership positions.

[ READ ALSO: Companies with the most gender-balanced boards in Kenya ]

For this list, we considered women who hold the positions of either chief executive officer (CEO), its similar ranking of Managing Director (MD) and those who Chair a board of directors.

Here is what we found.

[Caveat: This list only considers companies listed on the NSE, so female CEOs such as Tabitha Karanja of Keroche Breweries or Betty Korir of Credit Bank miss out.].

What do you think ? Leave your comment at the end of the article.

Margaret is a legal professional and an executive business partner with experience in retail management, governance as well as  corporate and regulatory affairs, Eveready EA says.

She also possesses business development, operations/administration and logistics experience. Before being made MD of Eveready EA, she was head of corporate services.

Margaret has been serving as Eveready EA MD since February and is an advocate of the High Court of Kenya.

Gerridina Johanna Maria Ten Den heads the Unilver owned Limuru Tea as CEO. She was appointed in January 2019 with a mandate to “manage risk and corporate reputation.”

Another lawyer on this list, Rebecca was the first ever woman at the helm of KENGEN when she was appointed in 2017.

She holds a Bachelor of Laws from UoN, as well as a Masters in Comparative Law from the University of Australia.

In 2010, President Mwai Kibaki awarded her the Order of the Grand Warrior of Kenya.

[ READ: How women bring in more profit at much lesser risk ]

The South African has been acting CEO since 2018 of the only I-Reit on the NSE.

Nasim is one of the five women at the helm of Kenyan commercial banks. On NSE listed banks, she is one of two.

The DTB CEO also sits on many boards of firms that make up the bank conglomerate within the region, while also sitting on the board of the NSE PLC.

Dr Diane Karusisi is an economist who heads the NSE cross-listed firm Bank of Kigali.

Prior to being BK Group CEO, Diane was the head of Strategy and Policy and Chief Economist at the Office of the President in Rwanda. She also served at the National Institute of Statistics of Rwanda.

She has worked at Credit Suisse in Zurich, Switzerland and taught Statistics at the University of Fribourg in Switzerland.

Having studied economics and majoring in econometrics, Diane holds a PhD in Economics from the University of Fribourg.

Appointed as managing director in July 2018, Mrs Mwangi has over 20 years of local and international experience in commercial and general management.

She has worked with Groupe Lactalis — Parmalat Botswana, as well as Cadbury Kenya and East Africa Limited, Unga Limited and Bayer East Africa.

With a female CEO at the helm as well, Eveready EA is one of two companies with an an all female lineup in terms of head of executive team as well as head of board of directors.

Lucy is General Manager, Enterprise and Product Development at Export Promotion Council (EPC) which is in charge of development and promotion of Kenya’s exports.

She has served as a member of the board of directors of the Kenya Plant Health Inspectorate Service and at Sasini Ltd’s board.

Surinder is an advocate of the High Court of Kenya and a business law expert. Being chair of Stanlib Fahari I-Reit makes the firm the second on the NSE that is all female led.

She helped establish the Common Market for East and Southern Africa (COMESA) Court of Justice and provided technical support to USAID regional trade team to encourage free movement of goods and trade between member states.

She sits on the board of International Federation of Women Lawyers (FIDA), FIDA Kenya (also co-founder), Capital Club East Africa, and the Beth Mugo Cancer Foundation.

[ SEE: Six ways to drive innovation culture in your organisation ]

Anne is a past chair of the Women Enterprise Fund Kenya.

She has also worked at Middle East Bank, ABN AMRO and Citibank, as well as previously being CEO of Jitegemee Trust Limited. She founded Soko Letu which managed a trader market in Nairobi’s Central Business District.

[ NEXT: Forever young: Why women often lie about their age ]