The photo was shared a day after world leaders converged in London for the burial of Queen Elizabeth II who dìed on 8th September aged 96, after reigning for 70 years. The Queen’s funeral and burial were held on 19th September and attended by hundreds of world leaders including Kenya’s President William Ruto who travelled to Britain on 18th September 2022.

We looked into the image purportedly showing President Uhuru Kenyatta arriving in London for the Queen’s funeral and found it to be false. First, we ran a reverse image search on the photo and discovered that it was taken on 21 January 2020, in London, when Uhuru attended a reception for the Heads of State participating in the UK-Africa Investment Summit in London.

The reception was hosted by the Duke and Duchess of Cambridge, Prince William and Kate Middleton at Buckingham Palace. During the reception, Uhuru met British Prime Minister Boris Johnson to discuss boosting ties between Kenya and the UK, as well as cooperation in milìtary training and security. 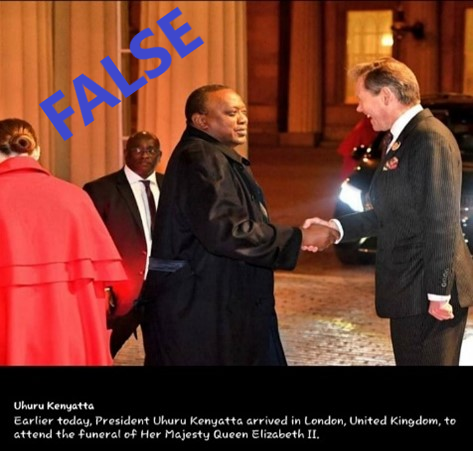 The photo was among other images of Uhuru’s visit to the UK that were shared on the official State House Kenya Twitter page on 21st January 2020. A keyword search doesn’t reveal any report of Uhuru attending the funeral.

On 9th September 2022, Uhuru, who was transitioning from the presidency, declared four days of mourning in Kenya, during which flags were hoisted at half mast.

By burial time, power had changed hands in Kenya, and William Ruto had taken over as president after being sworn in on 13th September 2020. While in London, Ruto was pictured with African leaders riding a bus to Windsor, the burial place for the Queen.

Next >> ODM Leader Raila Odinga Not Appointed To The United Nations