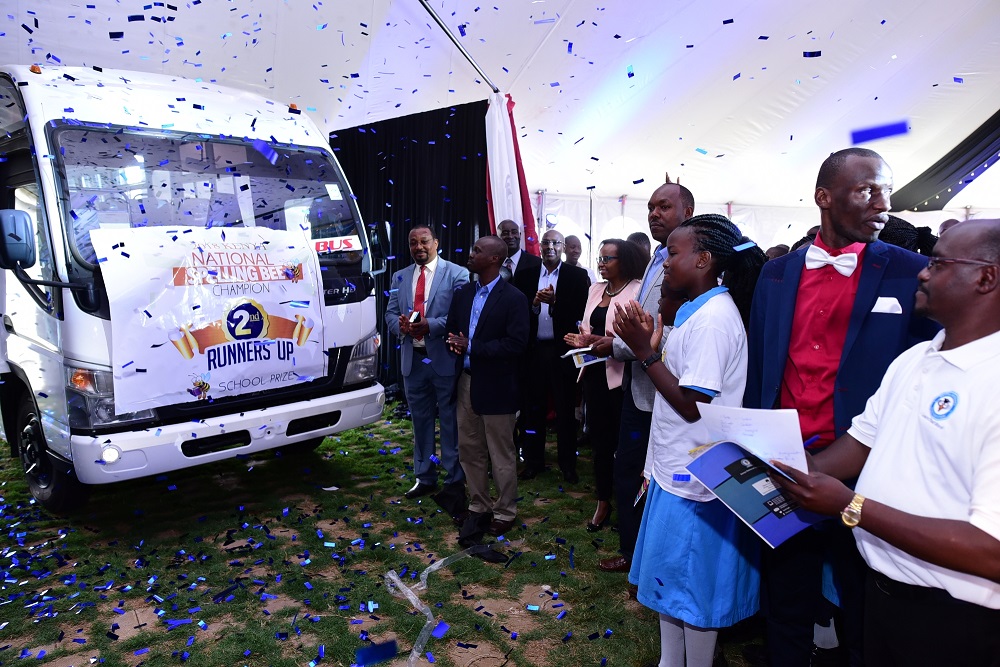 While addressing e*******n stakeholders during the Launch of the 2018 Championships, the Kenya National Spelling Bee patron Mr. Johnston Nzioka said that next year’s winners of the competition will walk away with a 52 seater school bus, while the 1st runners up will win a 33-seater bus and a 26-seater van for the 2nd runners up.

Mr Nzioka said the programme, now in its second year, plays an important role in improving literacy development of the young learners. He urged more schools to sign up for the 2018 edition as the opportunities and benefits are bigger and better. “This Championship is designed to engage school children, teachers, schools, parents, businesses and the community at large in a yearly e*******n process with an aim of developing and improving e*******n standards across the country,” Nzioka added.

READ: Class 7 dropout who became a doctor (a fake one!)

The Deputy Director of Quality Assurance and Standards in  the ministry of E*******n Joseph Wambua lauded the programme for its critical role in enhancing the English language among primary and secondary school students in the country. “I want to encourage our schools to sign up in large numbers for the 2018 Kenya National Spelling Bee (KNSB) Championship because of the huge opportunities the program is offering in improving performance,” he added.

Mr Wambua said that both spoken and written language are good for our young children’s development and the programme was doing a commendable job in raising the bar in-terms of improving the learning experience of school going children through growth in their English vocabulary, public speaking and self-confidence.

He said the programme was playing a significant role in instilling a reading culture among children which helps in developing confidence, encouraging public speaking as well as building good vocabulary which earns them good exposure during the early stages of their development.

He called on more schools to join the competition and reap the benefits since the program is designed to give all children equal opportunities in order to build their characters and confidence.

“Kenya National Spelling Bee imparts the spirit of hard work and determination in children while giving them an opportunity to make new memories and friendships,” he urged.

The competition which commences on February next year at the County Levels will attract various cash & laptop prizes, and story book donations to boost language and spelling. E*******n industry leaders from both the Kenya Private Schools Association (KPSA) CEO, Peter Ndoro and the Kenya Primary Schools Head Teachers Association (KEPSHA) National Chairman, Shem Ndolo endorsed this great initiative and urged all public and private primary schools countrywide to register in large numbers for the Championship.

The programme director Kennedy Odoyo, reiterated that all registered schools will compete for the top three county positions in each of the 47 counties and will later on proceed to the National level where the best three spellers will pit their spelling skills against spellers from other countries in the African Spelling Bee Championship. The competition is open to Class five to eight pupils from all public and private primary schools across the country.

SEE: From class-reader to world leader