In an interesting turn of events, NRG has moved to court to sue former popular Breakfast Show hosts Kamene Goro and Andrew Kibe after they quit the station to join rival station, Kiss 100.

The two are all set to debut on July 1 on Kiss Breakfast to take over from Adelle Onyango, who recently quit to pursue other interests.

According to the Milimani Law Courts cause list for Friday, June 28, NRG has filed two matters to be heard by the Employment and Labour Relations Court beginning 12pm.

It is not yet clear what grounds the media house will be arguing out but they are likely to be related to breach of contract especially with regard to the non-compete clause or serving of notice.

Media watchers will be waiting to see how this pans out. Interestingly, when the duo left NRG, they were given a warm send off by colleagues.

The station has since replaced them with Mwalimu Rachel.

However, the loss of Kamene and Kibe, who co-hosted the lively NRG breakfast show alongside DJ Kace, hit the station hard barely a month after it introduced FunX and Choice Radio to widen its audience reach. 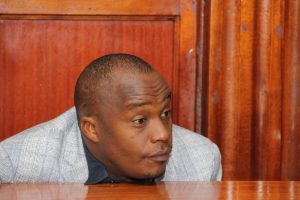