Njugush was voted the most influential young Kenyan in 2019. Photo/ Avance Media

Timothy Kimani, known to many as Njugush the comedian, has been voted the 2019 Most Influential Young Kenyan in the 3rd annual ranking poll.

This is after Kenyans were given an opportunity to vote for their own number one about a month ago. Avance Media, the Public relations company that organises the annual ranking, released a list of 100 most influential young Kenyans and gave Kenyans a chance to vote for their best.

The annual ranking poll recognises the top 100 young influential people in every African country. Njugush is now the third Kenyan to ever claim the top spot after Daniel “Churchill” Ndambuki (2016) and Dr Darshan Chandaria (2018).

Njugush started out as a mere actor when he debuted his entertainment career as a cast member of the Real House Helps of Kawangware and Hapa Kule News. He has since built a remarkable career for himself through social media where he now shares his content.

Other top celebrities who have made the top of the list include Media Personality and TV host Betty Kyalo. As per the rankings, Betty Kyalo was voted as the most influential young female in Kenya as she led the ladies’ to claim the most spots in Kenya’s creme de la creme.

Footballers Victor Wanyama and Michael Olunga were also represented among the top 10 influential Kenyans. Olunga plays for Japan’s Kashiwa Reysol while Wanyama is attached to English side Tottenham Hotspurs.

Peter Tabichi, the Kenyan teacher who got to win the global bet teacher’s award in 2019, also got enough votes to put him among the top 10. Others who made the top 10 include activist Boniface Mwangi, radio presenter Adelle Onyango, and entrepreneur Anerlisa Muigai.

See Also: 100 Most Influential Young Kenyans List Features the Bold and the Beautiful

He moves around schools in Kenya to motivate students by telling them how he struggled to get to where he is. Despite his devotion to motivating youths, Vidambu’s votes only afforded him the 76th place. 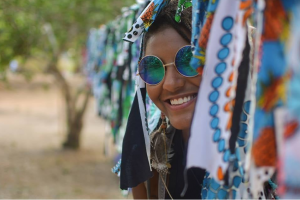 King of Comedy Churchill Lands Deal With Coast Group
The festival which will be held in April, is aimed…