Maina Muiruri, a journalism lecturer with a media career spanning over 25 years, was picked out of nine applicants. [ Photo / Business Today ]

Veteran journalist and former Managing Editor of the People Daily newspaper, Maina Muiruri, is the new Chairman of the Media Council of Kenya (MCK).

In a Kenya Gazette notice published today Friday 11th October 2019, ICT Cabinet Secretary Joe Mucheru appointed Maina and eight council members for a period of three years. The Chairman will be assisted by a Deputy Chairperson, to be picked by the council members.

Others are former Nation Media Head of Content Tim Wanyonyi, Corporate Counsel Dr Davidson Mwaisaka, university lecturer Dr Stanley Njoroge and Government Advertising Agency Director Gwaro Ogaro who is to be retained from the previous board.

The board has been reconstituted after a three-month hiatus since the expiry of a three-year term for the former team, with the delay having been caused by a court case filed by the Consumers Federation of Kenya that had wanted interviews for slot applicants stopped, citing irregularities in the procedure.

Over two weeks ago, the court declared the interview panel chaired by Kenya Union of Journalists (KUJ) chief Erick Oduor as duly constituted and within the law and ordered the process be completed within seven days.

Maina, now a journalism lecturer with a media career spanning over 25 years in the Standard Media Group and Mediamax, was picked out of nine applicants after competitive interviews to chair the nine-member board whose Secretary is the CEO of the MCK David Omwoyo. He quit the People Daily last year.

Maina holds a Masters in International Studies degree and a Bachelor of Arts (Political Science) both from the University of Nairobi, a Diploma in Mass Communication from Kenya Institute of Mass Communication and a Certificate in Leadership from School of Leaders of Nairobi Lighthouse Church.

The board, whose eight Council Member seats attracted 33 applicants, will for the first time feature seven media practitioners. Former chairman Dr Julius Kinyeki, a governance expert who took over after the exit of Charles Kerich to Nairobi County Government, presided over a team that also had a lawyer, a banker, a teacher and a theologian.

The Media Council Act under which the Council is established does not restrict council positions to media practitioners.

Other practicing journalists who have chaired the Media Council in the past include Joseph Odindo, who was then Nation Media Group’s Editorial Director and Royal Media Services Managing Director Wachira Waruru.

The Council comes into office at a time when MCK CEO David Omwoyo is leading the secretariat in rolling out the Strategic Plan (2018-2023) that aims at achieving milestone goals for the media regulator. 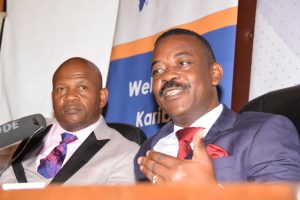