Elephants in a Kenyan national park.The Kenya Wildlife Service (KWS) has discontinued use of the Pound and The Euro in wildlife conservancies

The Kenya Wildlife Service (KWS) on Thursday halted the use of the British Pound and the Euro in all Kenyan national parks and game reserves in a move that will require foreign tourists to exchange foreign currency before seeking leisure in the country’s wildlife conservancies.

“This means that KWS shall henceforth transact in two currencies only; Kenya Shillings (Kes) and United States Dollars ($),” KWS said in a press dispatch.

KWS also underscored that the ban includes use of the mentioned currencies to process park entry fees.

The state corporation did not reveal the reasons behind the decision but it comes at a time when the country is phasing out the old generation Ksh1,000 note in a bid to stem illicit flows of cash that threatened to cripple the country’s economy.

However KWS said that M-Pesa, credit & debit cards and corporate cheques remain acceptable modes of payment in the conservancies. 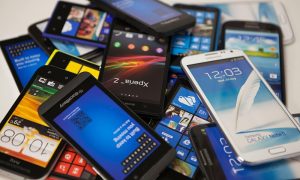 Despite Global Slump, Africa Is Still Buying Smartphones
Smartphone sales across the world are forecast to dip in…