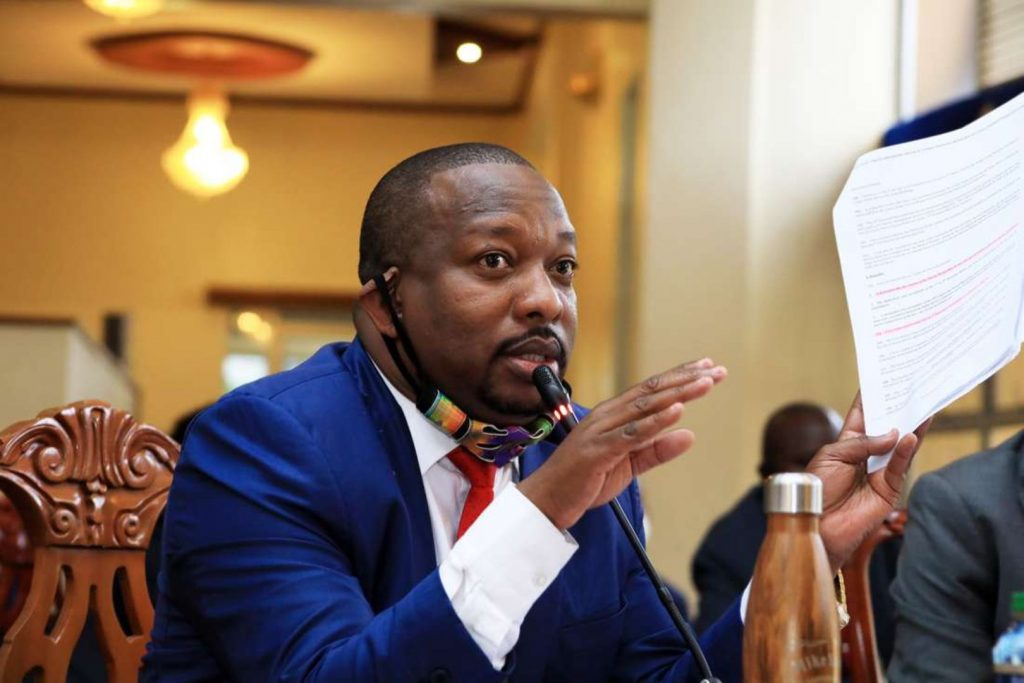 Mike Sonko responds to questions during a past grilling.

Nairobi County Governor Mike Sonko’s Senate impeachment hearing on Thursday was not short of drama as the ousted county chief mounted a fiery defence against the abuse of office and discrimination accusations leveled against him and in the process alleged that he was offered Ksh5 million a day to cede to a plot to loot from Nairobi County.

During the hearing that featured heated exchanges between the Governor and Ndegwa Njiru, the firebrand lawyer representing the Nairobi County Assembly, the Governor armed with a recording obtained from the Directorate of Criminal Investigations (DCI) claimed that Jambopay Chief Executive Danson Muchemi and Nairobi County Assembly Majority Leader Abdi Hassan Guyo attempted to get him to cede to the plot claiming the two went a further step of sweetening the deal by offering him a Ksh5 million daily bribe to fall in line.

In the thick of the claims was that the two admonished him for “rebuffing” their overtures calling him a fool adding that the two alleged that they “made” Ksh7 billion from a similar deal as was being floated to Sonko during Former Nairobi Governor Evans Kidero’s tenure.

“They told me wewe ni mjinga hautaki kukula sisi na Kidero tumekula Ksh7 billion in five years... wewe unatukanyagia,” said Sonko which loosely translates to “You are a fool, you do not want to eat. During Kidero’s tenure we looted Ksh7 billion through Jambopay but you are now frustrating the plan,”

“Towards the end of the clip they offered me Ksh 5 million per day from the county revenue. They gave me staff to work with. They did not know I had a recorder. The case is still ongoing and the file has already been forwarded to the Director of Public Prosecutions,” added Sonko.

In the audio clip which was played during the proceedings, Sonko allegedly played along with the two but had no intention of stealing from the county,

Instead, Sonko fired back at his accusers, the MCAs, denying claims that he flew his daughter Saumu Mbuvi disguised as a county administrator to the United States specifically to New York using Ksh4 million worth of taxpayer funds.

“My daughter did not spend KSh. 840 million as alleged by Citizen TV yesterday, the amount in question is only KSh. 2.6 million which was declared as my wife and daughter were part of govt delegation on the official trip to New York approved by State House,” said Sonko.

He also accused Former Nairobi County Executive Committee Member for Education Janet Ouko of conspiring to siphon money from the county by diverting bursaries meant for needy students by creating a fictitious school.

The Governor also dismissed harassment and discrimination accusations leveled against him by Mrs. Ouko.

Ms. Ouko resigned on January 7, 2019, after which she launched a series of attacks against the Governor including claiming that the Governor, during her time as CEC, called her at 2 am in the night to intimidate her, claims which she echoed in her testimony in the ongoing hearing. Mrs Ouko also alleged that Sonko molested women working under him based on her observations during her time as CEC.

“I warned her conspiring with MCAs to write blank cheques to give junior clerks which was the method they used to steal public funds. I stopped the looting but when I reported her co-conspirators were arrested, she was not,” said Sonko.

“When I questioned her regarding the matter, she resigned. I never fired her. I never suspended her, ” added Sonko.

“I don’t know why the investigating officers to date have not arrested her while her accomplices have been charged but you know her husband is a senior officer at the DCI attached to the United Nations so she cannot be touched,” he claimed.

On the accusation that he defrauded the county government of Ksh50 million in the Financial Year2018/2019, the Governor defended himself saying that the account was a confidential account created by the MCAs and domiciled in his office adding that the money in question was reverted to the Treasury at the end of the year anyway.

“We never utilized that budget. They wanted me to be part of the scandal in stealing taxpayers’ money. I refused. The money was returned to the Treasury at the end of the Financial Year. I never touched a coin,” he added.