Heineken East Africa has suffered a blow after the High Court declined to issue orders stopping the execution of a judgement which required it to pay Maxam Limited Ksh 1.7 billion in a distribution row.

Lawyers representing Heineken argued that the company has no assets.

“We have filed a notice of appeal and we shall be prosecuting it expeditiously. We ask the court to come at the earliest day to have the matter heard. During that, we pray that a stay be granted and we are ready to provide security”, they said.

“This is impunity by the company, they deliberately decided not to obey the orders issued on July 29. Defendants should comply with the orders before the stay is issued,” Nyachoti argued.

Justice Wilfrida Okwani, however, declined to grant the beer makers any orders and directed that they serve their application to the respondents.

The matter will be heard on September 17.

Last month, Justice Makau awarded Maxam Ksh 1, 799,978,868 as special damages for loss of business after its distribution agreement was terminated.

The judge ruled that termination of the contract dated May 21, 2013, by Heineken East Africa and Heineken International B.V was unlawful, irregular, unprocedural and therefore null and void.

“A declaration is issued that the Kenyan distribution agreement between the plaintiff and the defendants is in full force and effect as per the terms and conditions set therein,” the judge ruled.

Maxam sued the two international beer companies for terminating their agreement without reason.

Through lawyer Nyachoti, Maxam contended the agreement indicated that in case of termination before the end term, then they would discuss and agree fair and reasonable monetary amount for compensation.

It contended that it stood to lose over Ksh 1.7 billion of business if the agreement was allowed to end without compensation.

The firm accused the international beer companies of blatantly going ahead and acquiring its key customers as sub-distributors which was contrary to an order stopping the same.

The two international companies in response argued that the decision to cancel the distributorship was because they intended to attract more suppliers to expand the business.

The case spotlights the tender relations between local entrepreneurs and international companies, especially in the hospitality industry. 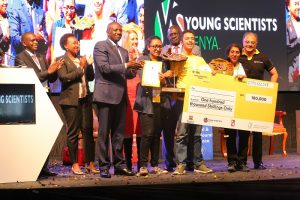