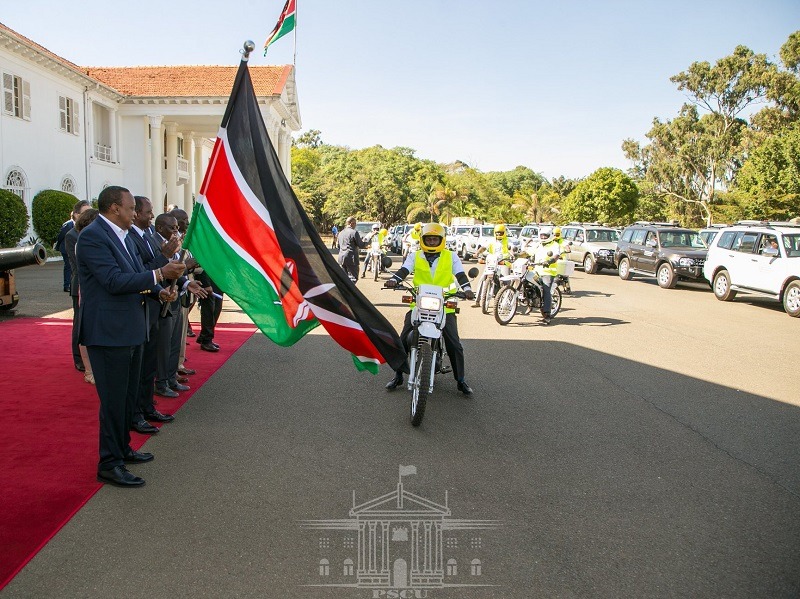 President Uhuru Kenyatta flags off fleet of new vehicles and motorcycles to be used by government officers to improve service delivery to the beneficiaries of the “Inua Jamii” programme.

The Government will soon roll out a Ksh 33 billion social inclusion programme that will boost ongoing efforts to transform the socioeconomic wellbeing of Kenyans and restore the dignity of the most vulnerable in society, President Uhuru Kenyatta has said.

President Kenyatta pointed out that the funds for the Kenya Social and Economic Inclusion Programme are already been budgeted for and that the programme will be rolled out in coming months.

“The target of the programme is to streamline our delivery systems so that every Kenyan who needs help can get it. Importantly, the Ministry of Labour, the National Drought Management Authority, the Ministry of Health, and the Council of Governors will all be involved in its administration,” President Kenyatta said.

The Kenya Social and Economic Inclusion Programme builds on the success of the Government’s cash transfer programme dubbed “Inua Jamii” which has, in the last six years since 2013, grown from slightly over 200,000 beneficiaries to 1.3 million currently and a jump in funding from Ksh 6.5 billion to Ksh 26 billion in the same period.

President Kenyatta said that in the same period, an additional 100,000 households have been supported under the Hunger Safety Net Programme in Wajir, Mandera, Marsabit, and Turkana at a total cost of over Ksh 25.2 billion.

“Dignity has been restored; livelihoods have been saved; and we have shown that this family called Kenya takes care of its own,” the President said.

The Head of State was speaking on Monday at State House, Nairobi, when he flagged off fleet of new vehicles and motorcycles to be used by government officers to improve service delivery to the beneficiaries of the “Inua Jamii” programme.

The 42 vehicles and 48 motorcycles were procured with the help of the World Bank from Toyota Kenya, Isuzu East Africa and Simba Corp.

President Kenyatta said the success of the Inua Jamii programmes has proved wrong those who doubted Kenya’s ability to implement a robust and transformative social inclusion intervention.

“Well, I can only say that we have proved the critics wrong — and quite dramatically. The programme, run by the State Department for Social Protection under the Ministry of Labour, makes sure that cash transfers do get to hundreds of thousands of Kenyans, right across the country,” the President said.

He commended the Ministry of Labour, the Kenya Commercial Bank, Equity Bank, the Cooperative Bank of Kenya and Post Bank and Kenya’s development partners for working together in ensuring that the life changing cash transfer initiatives are a success.

President Kenyatta said the Inua Jamii programme, whose deeper anchor is a family’s love, ensures that the country’s senior citizens have some level of financial empowerment in their sunset years while the younger beneficiaries have the very best start in life.

“Kenya, ladies and gentlemen, is a family, and we take care of each other,” the President said.
Labour and Social Protection Cabinet Secretary Ukur Yatani said the success of Kenya’s Inua Jamii programme is demonstrated by the growing number of countries among them Bangladesh, Indonesia, India, Lesotho, Ethiopia, Uganda, Malawi and Tanzania which have visited the country in on benchmarking visits.

“The recent approval of the Kenya Social and Economic Inclusion project, with US $ 250 million IDA credit and $ 70 million DFID grant support, from all development partners is a testimony of this strong commitment” Mr Belli said.

He thanked President Kenyatta for his leadership and commitment to furthering social protection for vulnerable Kenyans, saying development partners highly value their collaboration with the Kenya Government, especially in welfare and human capital development.