Wholesale sugar prices opened the year 2018 at a monthly average of Ksh 3,877 per 50kg bag and picked an upward trend in the succeeding months, though with some hesitations in April to record a price of Ksh 3,925/ 50kg bag.

Sugar production between January and September this year has increased by 43% compared to the same period last year.

According to the Sugar Market Report released by the Sugar Directorate, 362,018 Metric tonnes were produced compared to last year’s 252,415 tonnes. The increase, the directorate attributed to the industry recovery from the severity of the drought suffered by the farmers last year.

The report further says that this year, all the sugar factories, with the exception of Muhoroni Sugar Company recorded an improved sugar production as compared to the same period last year.

Despite the production being high compared to last year, January to June this year, the report says production has however been declining due to cross cutting factors in the entire sugar factories.

“Most factories are still grappling with limited supply of sugar cane due to the crop shortage, which has resulted to the mills operating below 50 percent of their crushing capacity”, the report says.

On sales, the report says that the total sugar sales in January to September 2018 were 343,643 tonnes compared to 250,274 tonnes sold in the same period last year, an increase of 37% attributing the rise to improved production and rising local sugar demand

The total sugar closing stock held by all the sugar factories at the end of September 2018 was 15,762 tonnes against 5,224 tonnes observed in September 2017.

During the period under review, the report adds that Kwale International and Butali Sugar Companies accounted for the huge chunk of the closing stock at 37% and 14% of the total sugar closing stock respectively.

The wholesale sugar prices opened the year 2018 at a monthly average of Ksh 3,877 per 50kg bag and picked an upward trend in the succeeding months, though with some hesitations in April to record a price of Ksh 3,925/ 50kg bag.

Thereafter, the prices increased steadily to reach an average high of Ksh 6,723 per 50kg bag in August 2018, which was at 22% up from the previous months.

This was attributed to Government crackdown on non-compliant sugar in the market, causing the commodity to be scarce.

However, due to increased scarcity of sugar in the market, the prices picked to Ksh 152 per kg in August and reduced again to Ksh 146 in September.

The Agriculture and Food Authority – Sugar Directorate produces monthly report that gives insight into how the sugar industry performed in a given period focusing on the local sugar market prices, production, imports, exports, sugar by-products and the world sugar market. 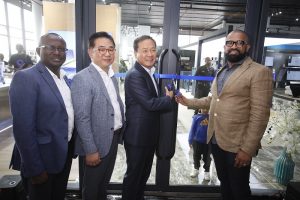 Samsung opens largest retail store in Africa in Nairobi
The store will house consumer electronics and mobile products, as…