The latest GeoPoll TV ratings covering the period between February 1 and February 14 this year show that Inooro TV, a Kikuyu vernacular station commands 4% of the Kenyan audience, the same numbers commanded by the Kenya Broadcasting Corporation (KBC) and 2% less than the numbers raked in by K24 TV, a mainstream media station.

Inooro TV which was launched in October, 2015 was part of Royal Media Services (RMS)’ diversification strategy informed by the cracking success of its vernacular radio stations stable and that of the first Kikuyu TV station, Njata TV.

Since its launch, Inooro has been so successful that the Kenyatta family owned Mediamax and Kirinyaga Woman Representative Purity Ngirici have launched their own vernacular TV stations, Kameme TV and Mt Kenya TV respectively.

These new stations have managed to eat into the viewership base of the mainstream channels. 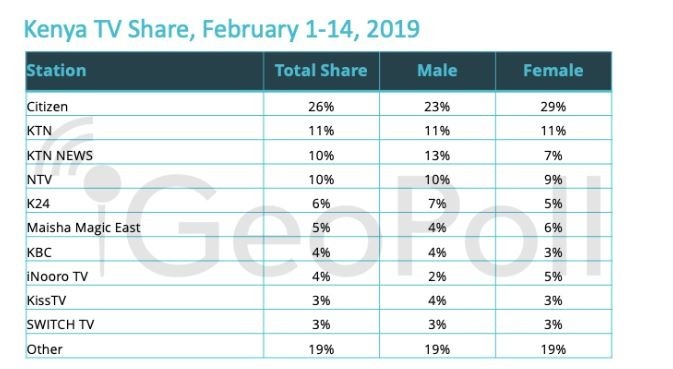 As a result, the ratings have translated into advertising revenue for the local stations with large and small companies knowing they can run their commercials and capture the attention of a specific type of audience.

Jamleck Wairegi, a news editor at Mt Kenya TV and a former senior political reporter at Inooro TV avers that the vernacular TV and radio stations will continue to be more popular even with the next generations because their target audiences resonate with the content that they produce.

Vincent Ochieng, a media studies lecturer at the Multimedia University of Kenya (MMU) partly agrees with Wairegi saying that the content aired by vernacular stations is tailor-made for people who love their first language but opines that the stations will become less popular in the next generations.

“You will find that the vernacular stations treat their news to suit what affects the localities of the target audience and the things that the audience  values the most, in the case of the kikuyu community; land and farming but is inevitable that those stations will be phased out in the end,” Ochieng told Business Today.

{See also: KRU chairmanship down to the wire}

When RMS was launching Inooro TV in 2015, plans were in the pipeline to also launch Ramogi TV (dholuo station), Chamgei TV (Kalenjin station), Musyi TV (Kamba station) but it appears that the media group shelved the plans.

That could be attributable to two reasons: fear that Citizen TV’s audience would have been cannibalized and fear that they would not keep up competition with mainstream channels and would die eventually.