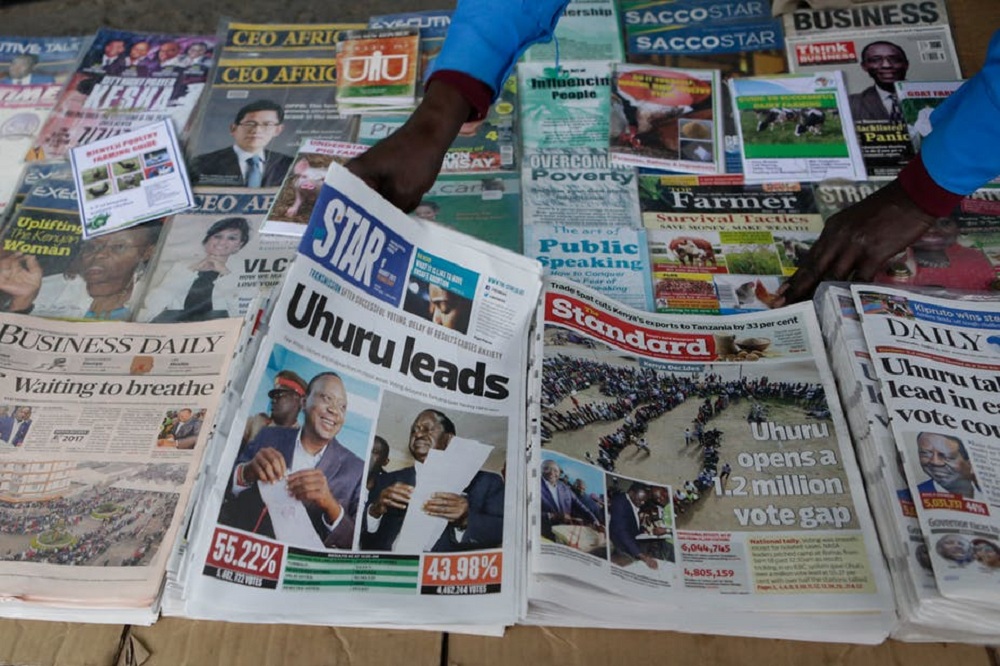 [dropcap]T[/dropcap]he European Union Election Observer Mission (EU EOM), which monitored last year’s elections in Kenya, has given a mixed scorecard for the media regarding its coverage of the high-octane political events in the country during that period.

The mission, which released its report in Brussels after Kenyan authorities sought to have it pushed forward (a claim Ambassador to Belgium and the EU Johnson Weru  has strongly rebutted), says the national state broadcaster, the Kenya Broadcasting Corporation (KBC),  lacks editorial and financial independence as the president/government appoints its board of directors and managing director and also have the mandate for KBC regulations.

It notes that KBC also relies in part on government subsidies and struggles to attract audience in areas with higher media concentrations.

The report notes that the national broadcaster is is legally required to provide independent and impartial broadcasting services and to offer a diversity of views. It is obliged to provide fair and balanced election coverage, and to give divergent views and dissenting opinions.

KBC is also obliged to allocate free airtime during the campaign to registered political parties participating in the election.

The report says that while it provided free airtime to some candidates, the criteria for allocation was not transparent and the slots did not appear to be granted in a systematic way.

“KBC representatives stated to the EU EOM it would provide the airtime to all contestants who requested it, however this was not publicised. EU EOM media monitoring found that KBC TV and radio provided equitable news coverage of the two main camps through both campaign periods. However, Jubilee received additional coverage in other editorial programmes on KBC TV,” the report says.

On the other hand, according to the report, the private national broadcast media at times leaned towards one or the other camp, but the overall coverage was relatively equitable.

NTV was the most equitable and provided more diverse and balanced coverage of August 8 post-election day developments than other national private TV channels (Citizen and KTN), the report says.

On its part, the report says KTN offered all presidential candidates slots of approximately one hour to present their platforms (this was not taken up by the two leading candidates). Private radio, Jambo, offered equitable coverage but favoured NASA in its tone.

On their part, vernacular radio stations showed a clear preference for one or the other camp, mainly in terms of time allocated.

SEE ALSO: Media cop to crack down on fake news on purveyors

“This was most pronounced for Kameme, which clearly promoted Jubilee in time allocated as well as tone of coverage, while it presented NASA negatively. Kass also leaned towards Jubilee, while Mulembe, Musyi, and Ramogi leaned towards NASA. In the last week of campaign coverage prior to 8 August, the favouring of one or the other camp significantly intensified. Prior to 26 October, Kameme promoted Jubilee’s views and urged high voter participation on election day, while it also portrayed NASA in a very negative light. Ramogi allocated the majority of its news coverage to NASA, focusing on their protest,” the mission’s final report says.

According to the mission, which was headed by Chief Observer, Ms Marietje Schaake, Member of the European Parliament from the Netherlands, who released the report, the print media attempted to provide detailed reporting on the campaigns, including less prominent contestants, prior to  August 8.

“The monitored print media gave almost equal coverage of both camps during both campaign
periods,” the report says.

The report notes that social media was increasingly used by institutions (including the IEBC) to communicate messages to the public and as a campaign tool of contestants.

“Facebook and WhatsApp were the most popular for electoral information, however they have low levels of trust compared to traditional media. The frequent spreading of rumours and fake news on social media eroded trust and heightened uncertainty in an already volatile environment. Disinformation material, sometimes of high quality, was often attributed to political camps to delegitimise genuine stories and/or confuse voters,” the report says.

It adds that this highlights the need for responsible fact-based reporting thorough training of journalists and improved public awareness of how to identify disinformation.

“Guidelines on the use of bulk messages and social media by the National Cohesion and Integration Commission (NCIC) and the CA (Communication Authority) were circulated in mid-June as a draft and later gazetted on 13 July. These include requirements for “honesty and accuracy” in publications, and for providers to remove “undesirable political content”. While the later version is less restrictive than the initial draft, concerns were raised about the risk of selective application and/or of a restraining effect on critical views,” it says.

According to the report, some EU EOM interlocutors claimed that both campaigns were using data miners to undertake targeted social media campaigning.

Concerns were also raised about the lack of data protection laws, leaving individuals at risk of
exposure and possibly advantaging the ruling party because of its access to citizen information through state institutions.

The report says the lack of applicable campaign finance laws further obscures the use of data mining as it is not clear who has paid for adverts and web-based materials and messaging (some of which were highly
controversial).

It its recommendations, the mission calls for the strengthening of the independence of the media
and journalists, including through the Communications Authority of Kenya and the financial autonomy of the Media Council of Kenya, and clarify their respective mandates to reinforce freedom of the media and to eliminate unnecessary and overlapping regulation of the media.

It also recommends for investment in media literacy, including critical thinking about sources and the potential of falsified documents.

It also says KBC should be developed into a genuine public service broadcaster with full editorial and financial independence, including by reducing the government’s role in leadership appointments and regulations.