Kenya has now become a hotspot for cyber fraudsters and criminals. Cybercrime in Kenya is targeting banks and other financial institutions. [Photo/CPO Magazine]

Technology is making life easier for everyone while opening up opportunities never before known to man, especially from the developing world.

But with the world now being a global village, thanks to the internet, so much has been opened up and this is minting millionaires left right and centre as long as they are strategically placed for the opportunities coming their way.

In Kenya, life has been hard for a while forcing Kenyans to be innovative to deal with the financial challenges bombarding them. With the government having killed the sun for the majority of youth who are jobless, it is now these young men and women who are creating their own parallel world to beat the system that has conspired against their success.

Read: Keeping Money in the Bank Won’t Make You Wealthy

While some do it for the sake of pushing boundaries and testing how strong technological firewalls can be, most are doing it to make money as fast as they can. It does not matter how but the end justifies the means. This is the mantra.

In a report appearing in The Standard, with the advancement in technology, even banks are now treading cautiously since they do not know when they will be attacked.

The paper reports that several banks in Kenya switched off their local area networks (LAN) during last year’s Easter holidays.

In the coordinated move, the institutions were acting on information that tech-savvy crooks were planning to raid several banks then. The banks did not want to leave anything to chance and so they limited access to internal servers paralysing any outsider who would have tried to penetrate the system.

Also: Be Careful Opening, Operating a Bank Account in Kenya

It is during that period that Barclays Bank lost Sh11 million from their ATMs.

With this knowledge, Kenya has now become a hotspot for cyber fraudsters and criminals who will stop at nothing to make the money.

The paper reports that in 2018 and 2019, cybercriminals made away with at least Sh2.6 billion and this could get worse with the tech-savvy teams expanding beyond Kenya. By spreading their tentacles, the IT graduates in their mid-to-late-20s could only foment their heists.

These youths are reportedly running multi-billion shilling heists from Kasarani, Roysambu and Ruiru and by scaling their operations across the region, the financial institutions can only get warier.

The report shows that those behind the scheme train their recruits in these areas where they undertake lessons on infiltrating systems and re-routing funds to their accounts.

So determined are these fraudsters that they even recruit bankers to help with smoother operations. According to the report, bank employees are bribed to plant software into the banking networks giving access to the crooks.

With bank raids having gone high-tech, the institutions are being given a run for their money as the suave operators seem to be making headway in the racket.

In January last year, the Directorate of Criminal Investigations (DCI) released photos of 130 suspects suspected of being involved in electronic fraud and hacking into bank systems.

With the fraud leading to the loss of huge sums of money from banks and other financial institutions, the DCI appealed for information leading to the apprehension of the criminals. 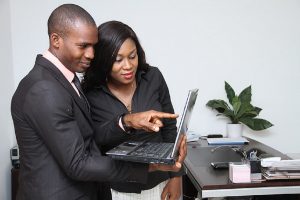 Rise of Workplace Husbands and Wives Shaking Up Offices
While the trend of having work-spouses is growing, majority of…