Equity Bank’s share of diaspora inflows grew by 28% during the first half of the year to Ksh 66.6 billion from Ksh 52.2 billion.

The Bank received more than 50% of all the country’s diaspora remittances largely due to its fintech capabilities, reporting a significant increase in remittance market share with Equity Bank projecting further growth this year.

Diaspora commission grew to Ksh 398 million during the six-month period from Ksh 383 million recorded during a similar period in 2018.

Equity Group Managing Director and CEO James Mwangi while releasing the half-year results said the increase was a result of a strategic decision to make diaspora remittances affordable.

“The volume is growing at 28% and the commission is growing at 4%. This implies that we are taking advantage of the high volume to reduce and pass the benefits to the customer and making diaspora remittance much cheaper,” said Mwangi.\

In 2018, diaspora remittances increased by threefold to Ksh 108 billion and income generated grew by 169% to Ksh 751 million.

This was due to an increased strategic partnership with payment partners including PayPal, Equity Direct, Western Union, MoneyGram, Wave and Swift.

The Central Bank of Kenya (CBK) has, for instance, identified the ease of sending money back home as a major factor in the sharp growth of Kenyan remittances. This has made the remittances to rise becoming the biggest source of foreign exchange, ahead of tourism, tea, coffee and horticulture export.

According to the World Bank, Kenya’s diaspora remittances in 2018 stood at Sh280 billion, eclipsing the Sh242 billion sent to the rest of Eastern Africa — comprising Uganda, Tanzania, Rwanda, Burundi, South Sudan and Ethiopia.

The growth was, however, been much slower than that of the previous year, when in the first five months of 2018 the remittances had gone up by 51.8 percent to Ksh 114.6 billion compared to the same period in 2017.

“The upward trend observed since 2016 is explained by strong economic conditions in the high-income economies where many sub-Saharan African migrants earn their income.” 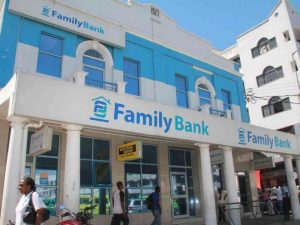 Family Bank Half Year Profit Soars, Lifted by Deposits and Loans
Family Bank has had a good half year, with profits…