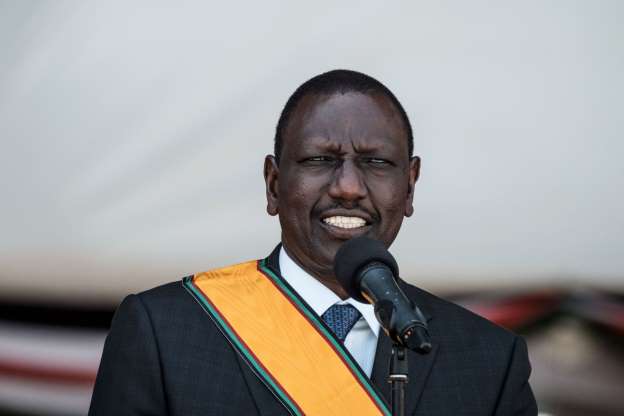 Deputy President William Ruto during a past event. He was cleansed on Friday by Talai elders

He is a man under siege, it makes sense that he would seek intervention from community elders.

On Friday morning, Deputy President William Ruto was cleansed by Talai elders ostensibly to protect him from harm and political plots against him. The Star reported.

Backed up against the wall by recent developments in the political landscape, Ruto turned to the elders in an event organized by the Nandi Laibons Council of Elders that politically speaking is designed to send a message that with the elders’ rituals, the country’s second in command is immune from bad omens.

Ruto arrived very early for the two-hour event that took place in Kipsirwo village from 5am to 7am. According to the report, the Deputy President arrived for the ceremony well before the call time.

DP Ruto arrived for the event in a blue blazer and khaki trousers. He was doused with milk and honey from a traditional gourd by elders dressed in wild animal skins.

The elders, popularly known as Orkoik, held prayers and offered sacrifices on a nearby hill. They included Christopher arap Agui, Lawrence Nganai, and Stephen arap Tormoi.

The elders then handed Ruto leadership instruments, including a baton and a traditional stick said to have been used by legendary Nandi chief medicine man Orgoiyot-Kipnyolei arap Turgat. The meticulous event then led the parties involved to the home of retired Anglican priest Canon James Baasi where elders from the larger Talai clan were selected to preside over the event.

The Star reported that it took the Deputy President’s camp almost six months to convince their boss that he needed to be “protected from political upheavals”.

“This is not a petty ceremony but a serious one. Those who accept it get divine protection from evil spell and physical harm,” said a source who spoke to the publication.

The Talai ceremony also involves dressing of a person with a lion skin and handing him a Colobus Monkey cap as he sits on a special stool, one which was last used to crown President Kenyatta after the Supreme Court ordered a repeat of the 2017 presidential election.

Freedom fighter Koitalel Samoei, who is reported to have predicted the coming of the whites and the construction of the colonial railway, was from the Talai clan.

Why is the cleansing important and why did Ruto feel it was necessary for his political ambitions.

The Talai Elders are well respected in Kalenjin politics. They bequeathed Former President Daniel Arap Moi the rungu that symbolised his 24 year rule which was passed on to his political heir & son Gideon Moi via his oldest son Raymond Moi at his funeral.

The elders are also said to have demanded the rungu back when the senior Moi passed on but it is not immediately clear whether they got it back.

Besides that, the Talai elders are believed to have the power to predict good fortunes.

According to The Star, villagers said they were warned by elders against moving closer as the Friday dawn ceremony went on.

“The neighbours communicated to each other on the phone in the early hours of the presence of the DP. He left before we could reach the home,” reported The Star.

After the cultural rite, Ruto left the venue at 7am without addressing curious neighbours who had gathered after getting wind of his presence.

The DP together with his political lieutenants and the elders later trooped to the DP’s Sugoi home for a meeting. There was no state official during the visit and the regional administration officers were not informed.

Ruto has come under intense pressure following a purge on his allies in the Senate and the National Assembly.