A fresh political showdown looms between President Uhuru Kenyatta and Deputy President William Ruto after the latter’s political allies were bundled out of leadership positions in the Senate in what signified the end to the dalliance between the two leaders elected on a joint presidential ticket.

On Monday, President Kenyatta moved to re-assert his authority after revelations that the Head of State is planning a coalition government with KANU Chairman Gideon Moi and Wiper Party Leader Kalonzo Musyoka.

In the changes, outspoken Majority Leader Kipchumba Murkomen was replaced with West Pokot Senator Samuel Poghisio who will now be deputised by Isiolo Senator Fatuma Dillo.

Susan Kihika, another Ruto ally was ejected as Majority Whip, a position that will now be held by Murang’a Senator Irungu Kang’ata.

Kang’ata will be deputised by nominated senator Farhiya Ali.

The changes were effected a day after President Kenyatta summoned a Senate Parliamentary Group to State House where he was widely expected to crack the whip on his deputy’s allies who he has accussed of undermining his authority on multiple occasions.

President Kenyatta invoked his powers as Jubilee Party Leader and summoned the Senators to the meeting which Ruto allies claim was given a wide berth .

Uhuru’s camp maintains that the two leaders have been sabotaging the president’s agenda both in and out of the house. The President is also expected to crack the whip in the National Assembly where Ruto allies will also be given the boot.

On one hand, Murkomen has been singing very different tunes to the one set by the party leader including opposing Mau Forest evictions while the government moved to protect water towers, taking part in early campaigns and his strong defence of corruption suspects most notably those involved in the Arror- Kimwarer Dams scandals.

Kihika, on the other hand, has been barred more than once from attending presidential functions over fierce criticism of President Kenyatta. She is also marked for defying Uhuru pleas to stop accompanying Ruto to political events on weekends.

Monday’s meeting also came hot in the heels of a post-election coalition deal inked and deposited at the Registrar of Political parties between the Jubilee Party and KANU. KANU “dropped” its plans to field a presidential candidate in both presidential elections in 2017 in order to support President Kenyatta’s second bid.

President Uhuru Kenyatta in a statement from State House congratulated the new appointees, saying he was looking forward to working with them to “deliver service to Kenyans”.

And as would be expected, Ruto allies trashed the changes terming them illegitimate claiming that they were not passed by majority legislators as envisaged by the party’s constitution.

Kericho Senator Aaron Cheruiyot said 23 out of 35 senators steered clear of the meeting.

Soy MP Caleb Kositany chose to describe it as a ‘”friends” meeting.

“I have always been in denial that we didn’t steal the 2013 and 2017 elections. Today its almost clear. Congratulations belatedly baba,” Kuria taunted in a post on Facebook.

See Also>>> So, Politics is More Important Than Health? 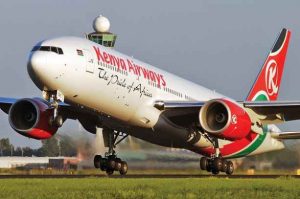