City blogger Robert Alai. He will be detained for 14 days to allow police complete investigations

A Nairobi Court has allowed the Police to detain controversial city blogger Robert Alai for 14 days to allow them complete investigations.

The police were seeking to hold Alai for 30 days but Nairobi Senior Magistrate Sinkiyian Tobiko declined to grant the request.

On Tuesday, Directorate of Criminal Investigations (DCI) detectives rounded up the blogger after he posted gory photos from Sunday’s Improvised Explosive Device (IED) attack on Kenyan policemen in Wajir County.

Also arraigned in court alongside Alai was Patrick Safari Robert, a prison warder who also posted the photos on his twitter handle.

Police Spokesperson Charles Owino on Monday justified the reason to arrest Alai saying the blogger had glorified the act of terrorism while also terming Alai’s actions as unpatriotic.

“As we mourn our fallen heroes, posting of their pictures online by one blogger is very unfortunate, inhuman, glorifies terror & is tantamount to supporting terrorism.This is indeed the lowest we can go. We condemn this act in the strongest terms possible,” said Owino during a press conference.

The police are looking to charge Alai with disclosure of terrorist activities information.

The fallen soldiers were on patrol between Khorof-Harar and Konton along the Kenya-Somali border when they ran into the IED planted in their path on Saturday night.

Eight officers died during the attack. 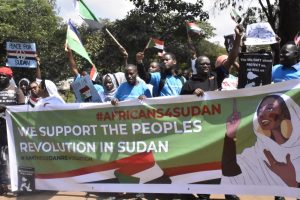