The Daily Post tweet of 23rd September 2021, reads: “KALONZO MUSYOKA almost beaten up in Nakuru for saying DP RUTO is a thief – See what angry residents told him.” The post has an image of Kalonzo addressing a crowd and links back to the full article on its website. 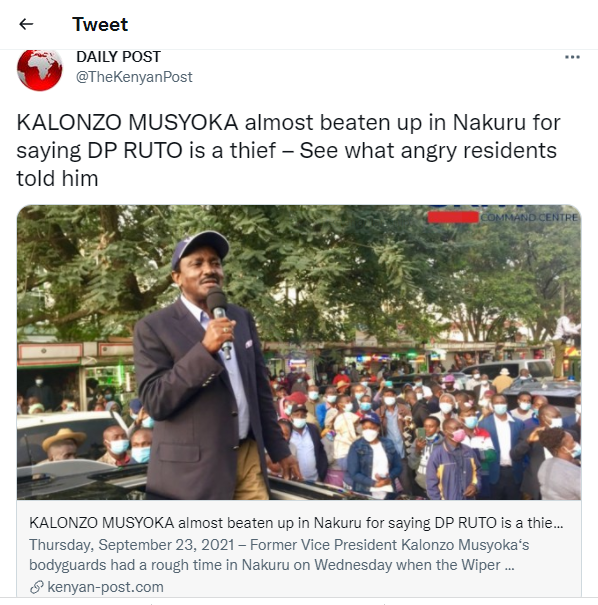 A fact-check, however, indicates the tweet is false as it has been sensationalised. First, a Google search for the news reporting of the i******t doesn’t deliver up any such coverage except for Daily Post itself and one other website.

In any case, mainstream media would have covered the story had there been an a****k or near a****k on the former vice-president. Footage posted on Mutembei TV’s YouTube channel on September 22 covered the entire event and there is no visible attempt by Nakuru residents to beat him up.

In his speech, Kalonzo does not refer to the Deputy President as a thief, only stating, in Kiswahili, that “…someone steals from you today, and bribes you tomorrow to praise him.” He doesn’t mention any name(s).

See >> Kalanzo Musyoka Among Rich Kenyans Who Own Helicopters

Kalonzo, who was in Nakuru to campaign ahead of the 2022 General Election, was in fact welcomed by Nakuru Governor Lee Kinyanjui.

VERDICT: The Tweet by Daily Post that Wiper leader Kalonzo Musyoka was nearly beaten in Nakuru is false as footage from the event doesn’t show hostility at Kalonzo Musyoka.