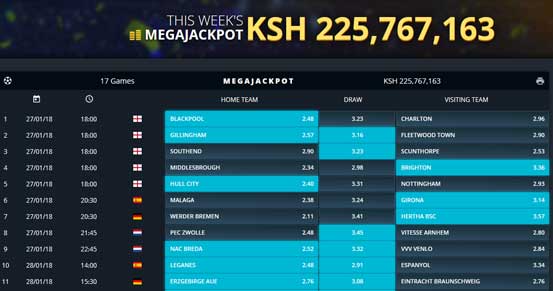 This week’s SportPesa Mega Jackpot has reached a staggering Ksh225,767,163. It’s jaw dropping. Indeed if you thought 27-year-old Samuel Abisai’s win of Sh220.6 million last May was colossal, then this week’s Mega Jackpot is nothing short of astronomical.

SportPesa, the leading gaming company, which has the highest starting amount for any jackpot in Eastern Africa – Ksh100 million – has raised this week’s Mega Jackpot amount to a record Ksh225,767,163. This is Ksh4,465,561 higher than what Abisai won for correctly predicting the outcome of 17 select games.

Abisai was the first ever SportPesa Mega Jackpot winner and the first to win such an amount in the region’s gaming industry history.

However, his record could be broken should one person manage to get 17 correct match outcome predictions in the current and upcoming Mega Jackpot games.

“We do hope someone takes the money home soon. Our driving force is that we are Made of Winners – when someone wins, we are happy because that is just one more life (and lives) changed forever because of SportPesa,” said SportPesa’s Head of Marketing, Kelvin Twissa. For one to win the jaw-dropping cash, bets must be placed before 6pm (Saturday January 27) which is when the first matches of Mega Jackpot kick off. (Source: Game Yetu)

> How Abisai, the first jackpot winner, celebrated his millions

> SportPesa signs up top journalists to its team

> Seven sure tips for winning a jackpot