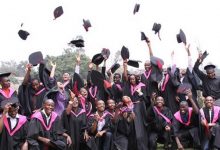 Students celebrate during a graduation ceremony. Ashford Gikunda opines that the 8:4: 4 education system is responsible for the high unemployment rates in Kenya. [Photo/Courtesy]

The over 60 universities in the country are churning out top brains during every graduation yet few get absorbed to the job market.

Thousands of Kenyan graduates are not engaged in any meaningful economic activities. They are just wasting away as the country grapples with an all-time high rate of unemployment. The new year heralds no hope for our youths.

The education sector is in a crisis. The country is awash with thousands of university graduates who cannot find meaningful engagement after college.

It is not because these highly qualified graduates have nothing to offer, but rather because their purpose for going to school was employment.

Nobody taught them how to create employment. As a result, individuals with sharp academic brains are rotting in waste as others take menial jobs as dictated to by harsh realities of life. Going to school today is no longer the differentiator.

A while back, a graduate who operates a boda boda in Nakuru town was featured on national television decrying how he has ended up while blaming the government for not finding him a job. Many more tarmacking graduates have been featured having taken up jobs that don’t align with their academic credentials.

The worst part is that there are thousands more who are in a similar predicament if not worse. They are just wasting away as the country grapples with an all-time high rate of unemployment.

The situation may not get any better soon. If anything it will deteriorate. I am not a sadist but a realist.

The 8:4:4 system only produces graduates who can only work in offices doing white color jobs. Sadly, there aren’t enough white color jobs for all of our graduates being churned out by our institutions of learning.

That is why we as a country need to change tact.

Universities must teach students financial education as a common unit the way they do with communication skills. They must boldly tell their students that it is easier to create employment than to get employed.

Kiyosaki argues that everybody is a genius but the 8:4:4 system judges all learners using the same yardstick regardless of individual learner’s giftedness.

Albert Einstein once asserted, “Everybody is a genius. But if you judge a fish by its ability to climb a tree, it will live its whole life believing that it is stupid.” If we judged our learners using their individual talents and giftedness, everybody will be an ‘A’ student.

The 8:4:4 system of education-oriented us to believe that education was for employment. Personally, that was my experience. Years later and sadly in my old age, I got a different orientation from the author of Prospering in Employment, Allan Bukusi.

Allan asserts that education is for enterprise and not for employment. I wish I learnt this when I was a little younger!

Most employees live a miserable life and gradually die poor. The monthly paycheque gives them optical mirages about their financial status.

The vicious circle of salary repeats itself every 30 days and before one realizes, age is fast approaching. The end result is, the poor employee retires to die…having nothing to show off for over 40 years of employment.

The Indians have an inborn entrepreneurial spirit. This combined with the fact that they expose their kids to family businesses at very tender ages, inculcate an entrepreneur culture in them. It is very hard for an Indian parent to enroll his child in a boarding school even in a high school.

This is because the child must accompany the parent to the shop/factory over the weekend to acquire entrepreneurial skills. On the contrary, the rest of us take even a 6-year old to a boarding school. You only need to look at the successes of the Indian Community in business to realize whose plan is working.

As Africans scramble for scarce job opportunities in the public service, the enterprising Indians are running business empires in major urban centers in Kenya.

All this time, the mentality that we must die reading the books has been firmly instilled in the Kenyan child, Then after scoring straight ‘A’s the poor chap is employed to work for an Indian who cannot fluently converse in english.

Being successful in school does not necessarily guarantee one success in life. That is the tragedy of life.

Many teachers and parents continue to say, ‘Go to school to get a good, high-paying job.’ When our kids go to school and end up being unemployed and end up depressed believing the world has failed them.

The tragedy of our economy is that the brightest go on to business schools, graduating with MBAs, and begin to climb the corporate ladder as employees and not employers. They end up becoming CEOs and executives of big business.

East Africa’s most profitable company, Safaricom has had two CEOs; Michael Joseph and Bob Collymore. Sadly, the two CEOs have not founded their own companies because they were wired to think like employees as opposed to employers.

The two top brains are not entrepreneurs. Why? Because that isn’t our culture.

Time has come when top CEOs must be compelled to start own companies. It should be made law that as long as one is a top CEO in Kenya, he/she is expected to found a company that creates employment as was done for him/her. That should be law.

See Also: Why ‘A’ Students Rarely Become Rich and More Succesful in life

The author of this article is a MA student in Project Planning & Management at the University of Nairobi (UoN) & author of Teacher Preparedness & Effective Classroom Skills.

Many well-wishers feel that the government is seeking to profiteer from the calamity.

It is the responsibility of the youth to secure the nation

The more we trade, the more transactions we make and therefore the circulation of money increases

Kenya Parliament is debating the crucial Data Protection Bill. This process must be very transparent…