Wazito FC Captain Dennis Gicheru playing in the NSL at camp Toyoyo. He has been appointed club CEO. Photo/Wazito FC

The defender, who is also a lawyer, has been sidelined as he is recuperating after undergoing a knee surgery in August. Gicheru will not be part of the playing unit at least until the end of the first leg. He now takes up his new role in the club executive team.

According to the Wazito President Ricardo Badoer, Gicheru will be given an option to either pursue his football career once he recovers or to fully decide to take up the new role. Badoer said this when he confirmed the appointment of the lawyer.

“As part of our policy of nurturing and exposing talents outside the realm of active football play, we wish to confirm that the club has appointed Dennis Gicheru as the club CEO effective immediately as he recovers and recuperates from his injury,” Ricardo said.

“Let it be noted that the club has given him the option to either pursue his football career once he recovers or to fully decide to take up the role. We wish him well as he undertakes his new duties geared towards scaling the club to greater heights,” he noted.

On his part, Gicheru thanked the club and stated that he will work with everyone to ensure that the club is successful on and off the pitch.

“I want to thank the club president for believing in me. This is entirely a new field but it’s one I believe I can excel in. I will work with everyone within and outside the Wazito family to ensure that the club is successful on and off the pitch,” he stated.

Wazito’s start to their first campaign back at the Kenyan Premier League (KPL) was below their expectation. The money bags played to a one-all draw with Bungoma based Nzoia Sugar FC.

Wazito were the most invested team during the league break as they bought a completely new team. Most of the players have played in the KPL before but the chemistry between them needs to develop. Wazito boasts a huge number of footballing talent who can make up a lethal team.

Wazito coach Fred Ambani seems to be spoilt for choice when it comes to selecting a team for a specific match. Wazito consists of a 28-man strong array of skill, talent, and experience. Some matches require skills, others require experience but one thing is certain; all matches require good team chemistry.

The Wazito squad does not have a single inexperienced player, especially the ones recently signed. These players joined Wazito expecting that they will be given a chance to play. However, for the coach to build the team chemistry, he will have to keep a specific first 11 for several matches.

The moneybags are poised to play Western Stima on Saturday at the Moi Stadium in Kisumu. Wazito will then travel to Kakamega’s Bukhungu Stadium to lock horns with AFC Leopards on 21st September. 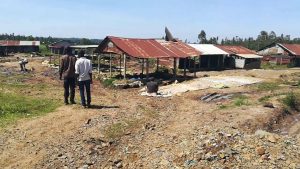