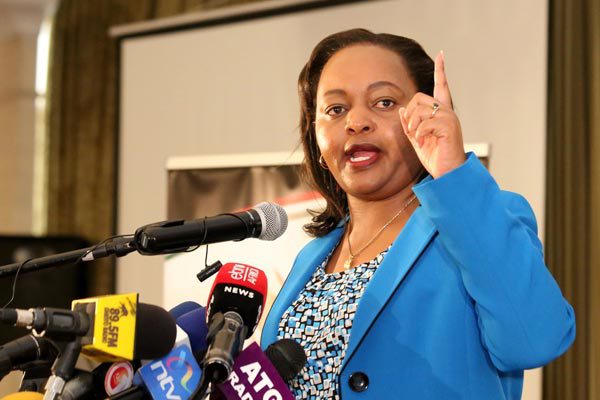 Twenty-three (23) out thirty-three (33) Members of County Assembly (MCAs) in Kirinyaga County on Tuesday voted to impeach Kirinyaga Governor Anne Waiguru over gross-misconduct and abuse of office adding another twist to her controversial political career.

Four members of the county assembly abstained while 4 others were absent.

The motion had been filed by Mutira Ward MCA David Kinyua Wangui on March 31.

Earlier, chaos erupted after two MCAs Anthony Munene (Karumandi ward) and Nominated MCA Lucy Njeri who are allied to Governor Waiguru were forcefully ejected from the proceedings while members from the two opposite camps exchanged blows as events unfolded.

Conversely, 23 out of the 33 MCAs slept at county headquarters through Monday night in readiness for Tuesday’s proceedings.

Governor Waiguru has however scoffed at her impeachment and faulted the MCAs for what she described as an “ill informed” and “ill timed” impeachment motion.

“As I have stated before, the issues raised in the motion are baseless and a waste of valuable time that would be better spent handling the serious issues impacting the county including the corona crisis. Their intent is merely to bully me to achieve nefarious and personalized political objectives,” Waiguru stated in a press statement before she was impeached on Tuesday.

In the statement, Waiguru stated that she had obtained a High Court order blocking the impeachment proceedings which the MCAs ignored.

“For some inexplicable reason, the members pushing this motion believe or have been led to believe they are above the law. They believe they are not bound by court orders. Their allegiance seems to be a master pulling and pushing the levers from outside the Assembly, and not to the rule of law,” stated Waiguru.