[dropcap]P[/dropcap]resident Uhuru Kenyatta has been declared President-elect with 7,483,895 votes after the disputed presidential election held on 26th October 2017. This despite elections not having taken place in four counties, and as more than 12 million voters countrywide boycotted the polls in line with a call by NASA leader Raila Odinga.

Fresh polls were ordered by Supreme Court on 1st September after it annulled the re-election of President Uhuru Kenyatta on 8th because of what it termed as irregularities and illegalities.

Despite that, the process has not been without suspicion and accusations, with critiques pointing fingers at the issue of voter turnout, with the chairman and the commission giving conflicting numbers. The chairman had earlier estimated the turnout to be 48%, which he later conflicted through a tweet saying it was 6.5 million voters.

He later revised the turnout to 33%, with international media estimating it at 27%. He, however, could not substantiate the conflicting information, saying that someone was working on the numbers. However, during the declaration the chairman revealed that the voter turnout was 7.6 million, a 38.8% of the total registered voters.

Before the polls, Mr Chebukati had said he could not guarantee Kenyans free, fair and credible polls with the prevailing environment. However, he later made a u-turn, stating that the issues had been addressed. One of the IEBC commissioners, Dr Roselyn Akombe, resigned citing political frustrations within and without the commission, fleeing to US where she worked with the United Nations before joining the commission.

The commission was later thrown into a turmoil when the rival candidate to President Kenyatta, Raila Odinga announced withdrawal from the race, saying that the issues that led to the annulment of the August polls had not been addressed. IEBC still retained him on the ballot, claiming that his withdrawal was not procedural neither legal. He got 73,228 votes.

HERE IS A GLIMPSE OF THE RESULTS 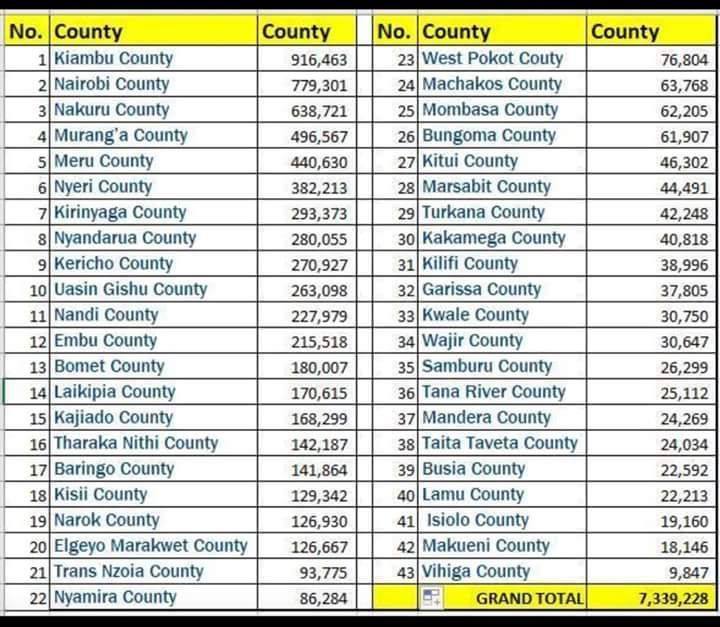 READ: How Uhuru and Ruto accepted to be paid four times more than their salaries

In the results, President Uhuru mysteriously retained the vote count in Nairobi county in the disputed repeat presidential polls as compared to the August polls. He has garnered a total of 779,463 votes as compared to August’s 791,291 votes, a difference of 11,828 votes.

In Vihiga county, President Kenyatta lost almost half of the votes he got in the August poll, getting 9,847 as compared to August’s 18,275 votes.