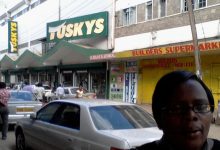 A Tuskys Supermarkets outlet. The chain has been ordered to pay suppliers by July 16.

First the empty shelves, then the denials and then ultimately, the big brother has to step in.

All is not well at Tuskys.

The Competition Authority of Kenya (CAK) is investigating the bank accounts of the supermarket chain for defaulting on Ksh1.2 billion owed to suppliers.

Business Daily on Wednesday reported that Tuskys has lost the confidence of the regulator prompting an investigation into one of the country’s oldest and largest retail chains.

The CAK started looking into Tuskys operations in April after reports emerged that it was not paying suppliers on time as stipulated in their respective contracts.

Tuskys Chief Executive Dan Githua who styles himself as “the digital retailer” has so far batted away any suggestion that the retail chain is struggling but customers across various parts of the country have been reporting empty shelves, the clearest indication that suppliers have halted deliveries over unpaid bills.

Is this the Nakumatt script all over again except with a different cast and a double shade of green and yellow complete with tusks?

The watchdog on Monday ordered Tuskys to settle the Ksh1.29 billion by between July 1 and July 16.

In an earlier communication, CAK had warned retail chain directors that they risked jail terms for defaulting on supplies’ payments. Now the authority also wants the retailer to furnish it with bank statements, audited accounts, list of suppliers, and their contracts.

“Any person who fails to comply with the order of the authority commits an offence,” said CAK in a letter to the retailer. “This matter remains under investigations and further orders will be issued as and when merited”.

The retailer on May 15, told the regulator that it owed suppliers a total of Ksh884.3 million. It later wrote to CAK on June 12, adjusting down the outstanding sums without proof of payments and concurrency by suppliers.

However, the regulator, established through independent investigations that the retailer had failed to disclose another Ksh400.9 million owed to suppliers.

“With this background and our investigations, the Authority has established that Tusker Mattresses Limited is experiencing incidences of abuse of buyer power in the form of delays in payment of suppliers contrary to sections 24A(1) and 24A(5)(a) of the Act,” CAK wrote in a letter to the retailer.

Those sections of the law say a company will be guilty if it delays payment of suppliers without justifiable reason in breach of agreed terms of payment.

For such abuse, the culprit faces imprisonment for a term not exceeding five years or to a fine not exceeding ten million shillings or to both.

CAK has ordered Tuskys to settle its outstanding debt in a specified schedule, failure to which the penalties will be imposed.

Another Ksh400.9 million supplier debt, which the regulator uncovered in its investigations, is to be settled in full within 14 days from Tuesday, June, 16.

While Tuskys has blamed its woes on the COVID-19 pandemic, a huge chunk of the debt had already accrued before the country reported its first Coronavirus case.

Tuskys becomes the first major retailer to face the scrutiny of CAK’s Buyer Power Department, which was created after Nakumatt Holdings collapsed with Sh30 billion owed to suppliers.

Tuskys now appears to have fallen prey to poor governance and ill advised expansion plans. The chain’s troubles has led to the emergence of new players in the ultra competitive retail market some of who are backed by private equity funds to the tune of billions.

Carrefour, a franchise owned by Dubai-based conglomerate Majid Al Futtaim, has access to funding to the tune of $3.4 billion (Ksh362 billion)

Retail chains especially supermarkets are known to abuse buyer power by reneging on financial commitment to suppliers knowing they have enough buyer pull power to make trade partners stay put even when the conditions leave a lot to be desired hence the creation of the buyer power department at CAK.

The suppliers are left with no other option but to bow to key retailers over fears of losing business.

Besides bank accounts, the investigations into Tuskys’ affairs will include a review of its audited financial statements and those of its subsidiaries for the last three years. The company has also been asked to provide the regulator with its management accounts for the last six months.