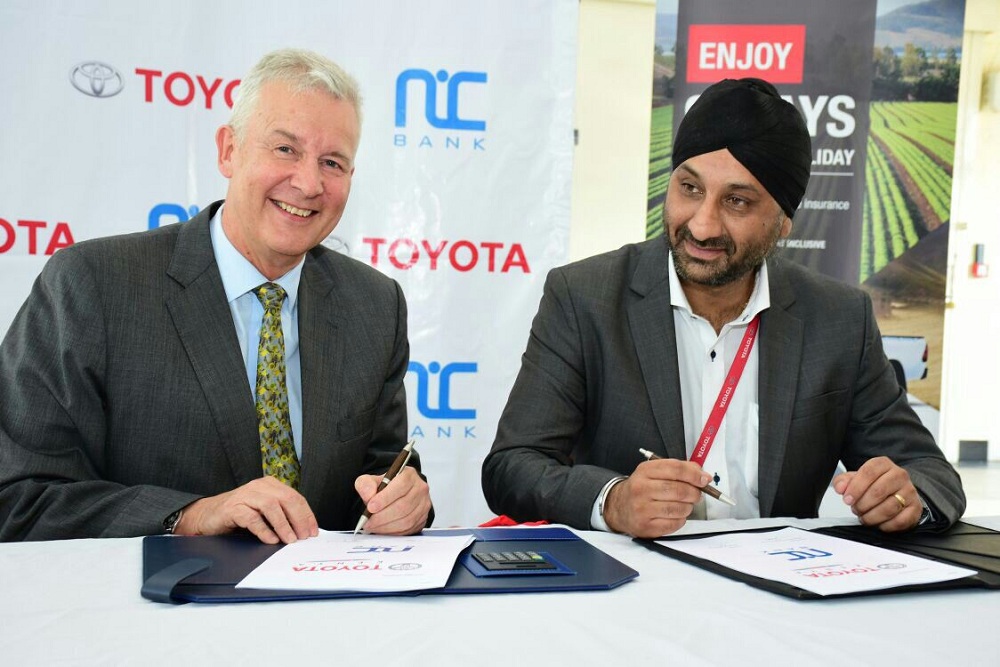 Toyota Kenya has signed an agreement with NIC Bank to boost its market share growth among SMEs and private enterprises with the bank offering a 95% asset acquisition loan for the purchase of brand new Toyota single cabin Hilux pick-ups.

NIC Bank Executive Director Allan Dodd said the move was part of the bank’s plans to cement its position as a leading asset acquisition financier in the country. He added the bank was focusing on making costs of property acquisition manageable with the new three months repayment holiday for its clients.

“Most banks have asset financing facilities. We are doing something different and this is why we have offered a tripled grace period given the region’s average lies at 30 days. With this, we seek to make asset acquisition manageable and have our customers running their businesses operations effectively,” said Mr Dodd.

The scheme is targeting individual business owners and SMEs within the agriculture, construction, Jua kali and wholesale business sub sectors that mostly require transport that the Hilux pick-ups with low fuel consumption.

He said in the company’s plan of having its market share grow further from the  5% increase in the 2016-2017 financial year, the  agreement was part of their positive moves to get  into the new year with political jitters buried in the past.

“We have a good understanding of the challenges that our customers experienced last year and believe this partnership will help them have easy access to finance. The grace period is long enough to ensure acquisition costs are flexible and cut down the loan repayment struggles as well,” said Mr Reel.

The agreement will be renewable after consideration of its uptake once its initial three months term lapses in April.

The new single cabin pick-up is well fitted with GD engine features which boost its fuel efficiency by up to 15 percent with a fuel consumption rate of 14 kilometres per litre. With this partnership, buyers will also get a year free insurance cover for the vehicles.

NIC Bank launched its online service system that has seen it receive a record over 5,000 client valuation forms from those seeking its various credit products that are now available on its portal.