The inception of gengetone to the Kenya music world saw new artists debut in the industry. The competition has been stiff between the new gengetone artists and those representing other genres.

Stivo Simple Boy is one of the non-gengetone new artists that have made it to the Kenyan music scene. When he started out, no one would have made it as a musician but Stivo amazed everyone.

Stivo’s approach to the rise to fame draws the difference between himself and gengetone artists. Business Today takes a look at Stivo Simple Boy’s rise to fame and what he did differently to remain relevant over time.

One thing that has really wasted gengetone artists is that they do not space their songs at all. A single artist can release two songs in a week without giving fans time to listen to and give feedback about the song(s).

Ever since rising to fame, Stivo has only released 5 songs; Two of his ones and three collabos. Over the same time Boondocks Gang have released over 10 songs. A multitude of their fans cannot even name all of their songs.

When it comes to music with a message, Stivo simple boy carries the day. In fact, his first song highlighting drug and substance abuse in the society got him an endorsement deal with NACADA.

Gengetone music revolves around the same thing. Each gengetone artists will sing about the same topic. The topics explored by gengetones cannot even be mentioned in this article and the artists have been in the spotlight for it.

Anyone who knows Stivo Simple Boy knows that he is one very humble gentleman. With over a year in the industry, Stivo hardly has any haters. He has always been and still remains humble hence the love he gets from Kenyans.

Stivo also hails from Kibera which is one of the biggest slums in Kenya. Despite rising to fame, Stivo has not changed a lot. He still remains a simple boy from the Kibera slums. He has also used his fame to help people in Kibera overcome poverty and do away with drug and substance abuse.

Publicity remains publicity be it positive or negative. When Stivo Simple Boy was still new in the industry, many Kenyans were making fun of his physical appearance. Anyone else would have given up but not Stivo.

He later came to admit that he was hurt by the comments made by people but remained focused on his music career.

“I know people are saying that I look like a monkey. It hurts but one has to get used to it,” Stivo once said in an interview.

A little of Lady Luck

Luck has always been on Stivo’s side in his journey to the top. His first interview on Chipukeezy TV earned him fame on social media. Kenyans widely shared his interview as a way of mocking him but little did they know that they were selling his music.

As people were listening to his acapella performance at the show, they were curious to listen to the whole song. More traffic was directed to Stivo’s song on Youtube.

No artist in Kenya has ever made it to the top the way Stivo did. His rise to fame was like a script of a book, a fairy tale. He is loved by Kenyans and doesn’t seem to lose the fame any time soon.

Read >> Moi Reveals Why He Loved Girls More Than Boys 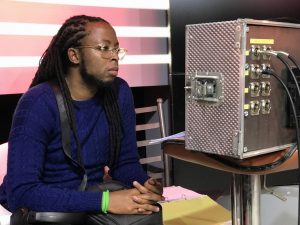