Radio Africa, like many media houses, is grappling with falling audience and ad revenues, but the Star’s fortunes have been dwindling since it relaunched in 2016.

The Star newspaper, the print arm of Radio Africa Group, has suffered a blow after losing four journalists at ago. It is understood the reporters, and a photographer, have left for greener pastures though sources indicated they may have resorted to quit due to work-related frustration.

Those who have left include business reporter Abel Muhatia, brought on board in May 2017 as part of fresh talent to rebuild the business desk after it collapsed with the exit of section editor Lola Okulo in 2016. Muhatia, who started out as a blogger, is joining Ogilvy Africa to try his hands at agency-based public relations.

Senior political reporter Rajab Ramadhan has joined the communication and media department at Amnesty International, while Joseph Ndunda, who covered security matters has been poached by TUKO, the online news site.

Others are crime reporter Kamore Maina who has gone to Standard Media and Photographer Collins Kweyu, who is serving notice as he prepares to go into private practice.

This comes even as Radio Africa moves to forestall a major fallout in the newsroom and at the same time pay arrears owed to correspondents. Some journalists complain of highhandedness by the top editorial leadership.

“It has come to my attention that some of you are being out-rightly rude and uncooperative to the acting photo editor,” Ilado writes in an email to newsroom staff. “Some of you don’t bother to attend meetings called by him or even offer explanations when asked to. This is not just bad work ethics but it is also unacceptable and amounts to gross insubordination.”

Meanwhile, correspondents at the Star Newspaper continue bear with delays in payments, which often run into months. The situation is so bad that, according to insiders, some journalists are unable to report to work for lack of fare.

The Star newspaper has been experiencing lean times over the past two year, as circulation has fallen to below 7,000 copies per day.

Radio Africa, like many media houses, is grappling with falling audience and ad revenues, but the Star’s fortunes have been dwindling since it relaunched in 2016.

According to research released by the Media Council recently, The Star newspaper is the least read newspaper in Kenya at 6%, trailing free People Daily. According to The Status of the Media Report 2019, the Daily Nation and Standard are the most popular print publications at 52% and 31% respectively. The free sheet People Daily (PD) comes third at 8%, Star (6%) while Taifa Leo and The Nairobian tie in fifth position with 2% of the readership.

The Star newspaper has been experiencing lean times over the past two year, as circulation has fallen to below 7,000 copies per day. “That we are printing these few copies and still getting returns is something to worry about,” the company auditor said at a recent meeting with the staff.

[ NEXT: Betting firms under siege as government begins crackdow on tax cheats ] 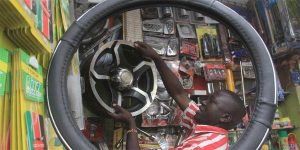