At 43, on his birthday 18th January 2014, Kenneth Binyavanga Wainaina came out of the closet as an African gay man. Five years later on 21st May 2019, he breathed his last in the Green City in the Sun at about 10pm.

In the best way he knew how, Binyavanga published The lost Chapter of his memoir titled ‘I am homosexual, Mum’ an imaginary conversation with his mother on her death bed about his sexual preference in 2014.

The article takes a personal angle for Binyavinga’s struggle with his sexuality from a tender age of five up to his adulthood. The piece got attention of the world making him the first ‘visible’ gay Kenyan.

Shortly afterwards, Time Magazine in its annual 100 named him as one of the ‘Most Influential People in the World.’

Sadly, his mother of Ugandan origin, passed while he was in South Africa and never got the chance to tell her his deepest secret. But mothers know. “My mother I think for sure [knew he was gay],” said Binyavanga in the BBC HARDtalk.

His father, Kenyan, also passed before he came out to him. “I almost had ‘the conversation’ with my dad a month before his death but I kept postponing it. I felt terrible after my dad died and I had not told him I was gay,” he revealed in an interview with a local blog.

Two weeks later, he finally came out of the closet to his siblings.

The public and his fans received the news with mixed emotions. While others condemned, abused, scolded, cursed an laughed at him on various social media platforms for being gay, the liberal minded supported him equally.

The Kenyan 2010 Constitution does not recognize any relationships between persons of the same sex and perpetrators risk facing imprisonment for 14 years. The locals are not kind either as they consider it a cardinal knowledge that is against the order of nature thus fueling homophobic persecution.

Coincidentally, Binyavanga’s confession came around the same time when Nigerians President Goodluck Jonathan and his Ugandan counterpart Yoweri Museveni signed anti-gay laws that banned same-sex relationships. The African continent was at the same period seeing more gay people making it clear that they exist and will not apologies for it.

The second born child in his family, Binyavanga, which translates to mixed up, claimed he knew he was gay at just 5 years old.

“I knew there was this thing, a certain pull to men. I knew how to hide from everybody. My sister was very close to me. It was private thing that I could not explain. I tried to file it away separately by having a place in my imagination to deal with it and not act on it,” said Binyavanga.

In his queer life, Binyavanga has avoided present tense, “I cannot say the word gay until I am thirty nine,” writes Binyavanga.

“I have slept with three women in my life. One woman, successfully. Only once with her. It was amazing. But the next day, I was not able to” he writes.

Away from his bedroom, Binyavanga came to the lime light for his short story ‘Discovering Home’ which fetched him the Caine Prize (African Writing) for the year 2002.

In 2003, he established Kwani? the first literary magazine in East Africa since Transition Magazine. He was later awarded by the Kenya Publisher’s Association, in recognition of his services to Kenyan literature.

In 2007, Binyavanga was nominated by the World Economic Forum as a Young Global Leader, an award given to people for “their potential to contribute to shaping the future of the world.” He however declined the award.

His satirical essay ‘How to Write About Africa’, published in Granta magazine, attracted wide attention.

In 2012, after seven years of writing, he published his memoir ‘One Day I Will Write About This Place.’

Others pieces written by Binyavanga include: An Affair to Dismember, Beyond the River Yei: life in the land where sleeping is a disease, Eines Tages werde ich über diesen Ort schreiben, Nguvu Na Nyoka among others.

During world Aids Day in 2016, he announced through Twitter that he was HIV Positive. 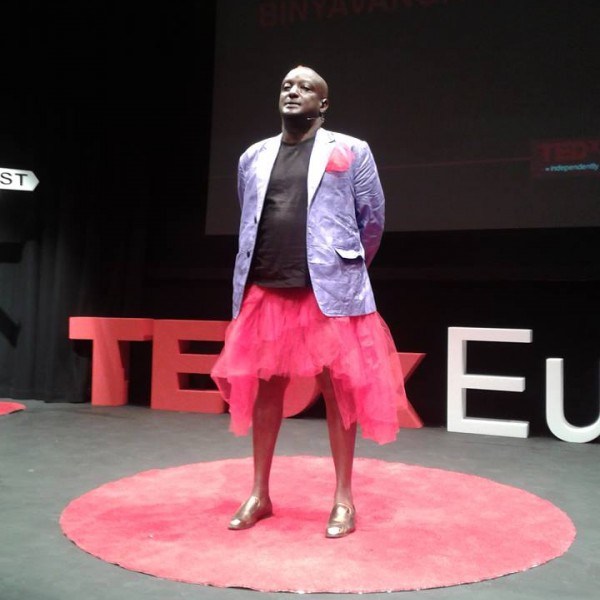 While in Germany in 2016, Mr Binyavinga claimed to be a victim of racial abuse after being beaten by a German Cab-driver while attending Daad Fellowship.

In the same year, he suffered stroke while in his home in Nairobi that led to his hospitalization. Since then he has been battling the disease until his demise.

Born and bred in Nakuru County in the Kenyan Rift Valley, Binyavanga started out as a food and travel journalist In South Africa.

Recently on 3rd May, 2018 Binyavanga Wainaina announced that he is planning to get married to his gay partner from Nigeria in South Africa in the upcoming year.

I knelt down and asked my love for his hand in marriage two weeks ago. He said YES. We will be married in South Africa early next year. I am beside myself with excitement that he has agreed to spend the rest of his life with me.