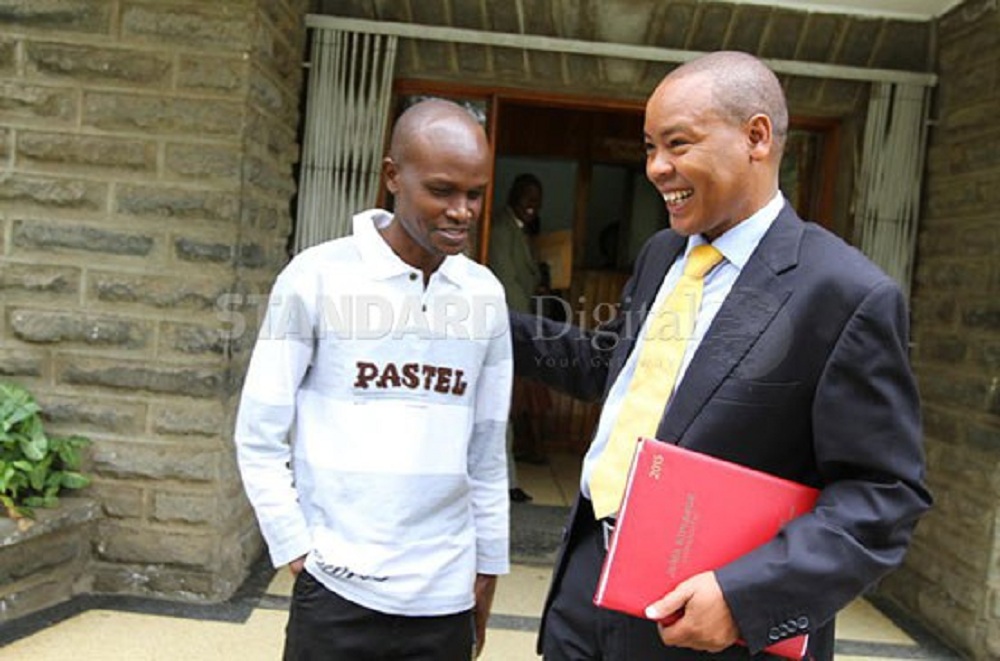 Standard Group Deputy News Editor Alex Kiprotich has been appointed press secretary of as former President Daniel Moi, replacing long-serving Lee Njiru in what appears to be a protracted battle for influence at his Kabarak home.

Moi’s personal secretary John Lokorio confirmed Njiru’s replacement by Mr Kiprotich on a day he claimed there was a plot to edge him out.  Mr Kiprotich, who doubled as Standard Group’s Nakuru Bureau Chief, has served at the media house since July 2007 starting off as an investigative and special features writer.

A few years ago, he was moved from head office to the Nakuru bureau, where he could understudy Mr Njiru. He was given an official government car attached to Moi.

Besides, he has  Master of Science Degree in Human Resource Management fro Jomo Kenyatta University of Agriculture and Technology.

A David Astor Journalism Award Winner 2010,  Mr Kiprotich is a former Speech Writer/Public Relations Officer at Kabarak University. During the Astor fellowship, he was attached at the Independent newspaper in London, which honed his writing skills, hoisting him from a struggling reporter in Nakuru to one of the most watched journalists in Kenya.

The Moi family is the principal shareholder in Standard and insiders say Mr Kiprotich is likely to keep both jobs to ensure he watches out for Moi’s interests at Standard Group.

Meanwhile, Mr Lokorio insists Njiru retired last year after several extensions of his contract. A government driver recorded a statement with the police claiming Mr Njiru should not have the vehicle “because he has retired”.

Peter Ngetich recorded a statement at Menengai Police Station in Rongai, Nakuru County, over the matter. In Mr Ngetich’s statement dated October 9, 2017, the driver says Mr Njiru has retired and should not have a government car.

In the statement, it emerged that orders to repossess the vehicle were issued by Lokorio. The revelations suggest a quiet  battle that could be pitting Mr Njiru against some operatives who want him out of the former president’s circle.

However, in an exclusive interview with the Nation, Mr Njiru said he was aware of the statement and was ready to defend himself in court. Mr Njiru, however, emphasised that he had not retired and that he was in office in accordance with the Presidential Retirement Benefits Act.

“I want to make it very clear that I am still former President Daniel arap Moi’s press secretary. I am aware of some operatives being used by some prominent people to insinuate that I have retired, but I am ready for them,”  Njiru told the Nation on Monday.

He further said the government had renewed his contract for three years which will end on June 30, 2020. A letter signed by former State House comptroller Lawrence Lenayapa, dated June 5, 2017, indicated that Njiru’s contract has been extended to June 30, 2020.

Mr Njiru said the statement by Ngetich could have serious repercussions and be a threat to his life.

“Police might even shoot me, believing that l was a thief illegally possessing a government vehicle yet l am still a civil servant,” said Mr Njiru. “I have built a reputation as an upright, loyal and diligent civil servant for the last 43 years, 41 of which l have served the Presidency from 1977. Those being used to soil my name should be ashamed,” said Njiru.

Mr Njiru, known as the former President’s most trusted confidant for the past 43 years, has enjoys very close proximity to the presidency, making him a powerful figure in the larger scheme of things.

READ: SAFARICOM COULD BE FORCED TO SHARE M-PESA AGENTS