Sports b*****g company, SportPesa has cancelled all sports sponsorships in Kenya with immediate effect following delays in renewing its licence and suspension of PayBill numbers.

In a statement on Friday, SportPesa said the gaming industry has been operating in an extremely challenging business environment for the past couple of months.

It added that the move to suspend its PayBill numbers has brought about immense pressure on the business necessitating a re-evaluation of some plans.

“Sportpesa as a business has been subjected to punitive measures by regulators such as delayed license renewal and the suspension of PayBill numbers with these actions considerably reducing the level of business operations,” read part of the statement.

“In light of these developments, we regrettably wish to announce that due to the uncertainty of this situation Sportpesa will be cancelling sports sponsorships effective immediately. All clubs and partners will have received notices as provided for in their contracts,” the statement said.

“Sportpesa is passionate about sports development in the country and this decision was regrettably arrived at haltingly and after a lot of deliberation and thought,” the statement added.

SportPesa insisted that it has been compliant with all the statutory and regulatory requirements.

“We have always been compliant with all the Statutory and Regulatory requirements. We are a law-abiding organisation. For now, we remain positive that the current situation will be resolved amicably and urgently, and we continue to seek the goodwill of all actors towards normalising the environment for the gaming industry,” its said.

Last month, the Kenya Revenue Authority (KRA) cleared 10 b*****g companies whose licences had been suspended. However, SportPesa and Betin, the leading gaming firms in the country were left out.

Those cleared by the taxman were Betway, OdiBets, Mozzartbet, Ken Bookmakers, Lucky 2 U, Eazi Bet, Kick off, Eastleighbet, Pals Bet and Bet boss.

Interior Cabinet Secretary Dr Fred Matiang’i had suspended the licences of 27 b*****g firms because they were allegedly not compliant with tax regulations.

The B*****g Control and Licensing Board (BCLB) says the b*****g industry is worth Ksh 200 billion with the projections of hitting Ksh 500 billion by 2050 though the b*****g companies dispute the figures. According to the government, in 2018, b*****g firms paid Ksh4 billion cumulatively in taxes contradicting some of the firms’ tax payment statements.

When they appeared before the Senate Justice and Legal Committee late last month, the b*****g firms protested the continued suspension of the licences, saying the Tax Appeals Tribunal had allowed them to continue operating.

Meru Senator Mithika Linturi said it was regrettable that the ministry enforced the ban despite being served the order issued by the tax tribunal.

“When you look at the papers or documents presented before us, you will be left wondering whether this is a country where people operate outside the law,” he said.

The committee resolved to summon Matiang’i over the issue.

“We want them to tell us why they have decided to treat court orders as tissue paper,” Nandi Senator Samson Cheragei, who chairs the committee, said.

Here is the SportPesa statement: 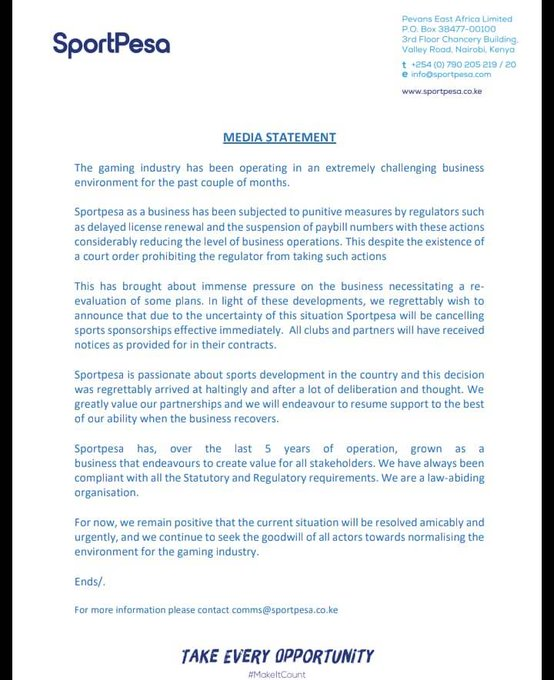