The appointment of Ms. Laichena effective November 1, follows a series of competitive recruitment processes and is part of Sanlam Kenya’s ongoing efforts to deepen its leadership capacity for business growth.

“The appointment of Ms. Laichena underlines Sanlam Kenya’s commitment to our business transformation agenda largely geared at repositioning us as a major provider of life and general insurance products’ and services while growing shareholder value,” Mr Tumbo said, adding that, “As a career Insurance Executive, Ms. Laichena enjoys the wealth of experience and leadership capability required to transform Sanlam General Insurance to the top of the league.”

On her part, Ms. Laichena said: “I am humbled to be taking over as the substantive Sanlam General Insurance CEO at a most exciting moment in the history of this company. Backed by a complement of some of the most experienced Insurance executives in Kenya, we shall be building upon our recent success factors to further raise the value of general insurance services to our growing clientele.”

A seasoned Insurance Executive, Ms Laichena started off her career as a Management trainee at the then Lion of Kenya Insurance Company 19 years ago before joining ICEA, Jubilee Insurance, Cannon Assurance and Heritage Insurance in various positions.

See also: Sanlam Jumps out of the Red to Post Half Year Profit

Last year, Sanlam General Insurance returned an underwriting profit of KShs 40.9million with a profit before tax of KShs 193.6million up from KShs 102.3million posted the previous year. 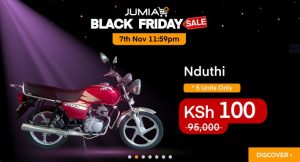 Jumia Aims to Hit 16 Million Visits on Black Friday
The event will run from 8th to 29th November, with…