Youths, mostly, former criminals and drug addicts from Thika’s Biafra estate, who are running a car was business.

A group of youths mostly former criminals and drug addicts from Thika’s Biafra estate are slowly picking up their lives thanks to car wash that has been keeping them engaged as well as providing for their daily needs.

Some of the 28 members of the Thingira Team were the most feared criminals in town and after persuasions to change their lives, established the car wash, little did they know it would change their lives for the better.

To the jailbirds, arrests and frequenting the courts has become a thing of the past, and hope they will soon convince residents of the area that their lives took new turns towards transformation.

Through the leadership of area MP Patrick Wainaina, they own a busy car wash yard, uniform and sufficient water to run their activities.

Their chairman John Kamau Muchiri said most of the members are family men and the car wash has helped them provide for their families.

Initially, he says, it was not easy as the temptation to return to their wayward ways were high due to low income that they used to generate from the car wash. Matatu drivers are their major clients and in a day they receive more than 50 vehicles for cleaning.

“Each member makes about Ksh 1, 500 daily. Residents have slowly come to trust us with their vehicles as many felt unsafe dealing with the group,” he said.

The area is one of the most notorious estates in Thika town known for night muggings and bhang trafficking as criminals use the yard for hideout especially at night.

They have been forced to secure uniforms to distinguish themselves from thugs who have been terrorising area residents around their yard.

One of the youths undergoing the reformation programme Peter Githinji confessed that he was a drug addict who was left out in the KAA SOBER programme engineered by Kiambu Governor Ferdinand Waititu.

He said the programme sponsored by the MP was helpful and is transforming many lives.

Julius Mucheru a member of the group said the car wash has helped them to start a new life thus creating employment to their members.

Thika MP Patrick Wainaina advised them to desist from criminal activities saying they should seek the government’s Biashara Empowerment Fund to grow the group.

He called on the police to up crackdown on bhang trafficking which had become common in the town. 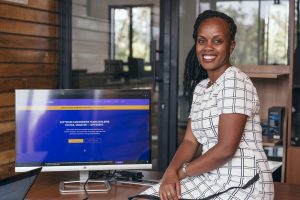 Inspired by a ‘mean mum’, lady rises to the top of tech business
Many people choose their careers, but there are very few…