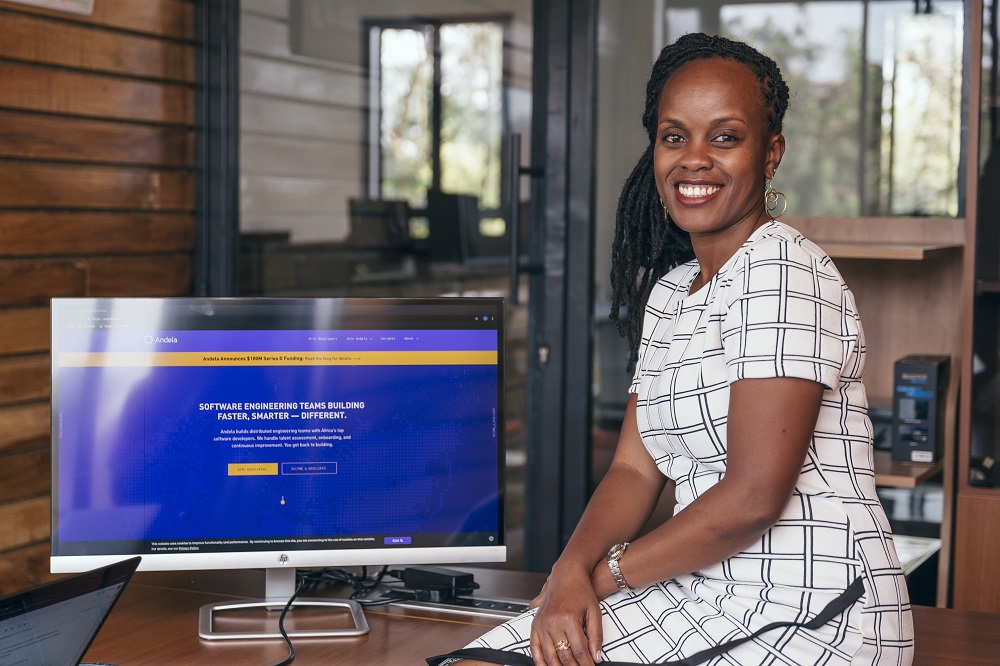 Many people choose their careers, but there are very few like Janet Maingi who are lucky enough to be chosen by their careers. While Jane studied Bachelor of Commerce (banking & finance) at Kenyatta University, she knew she would spend most of her life in banks or finance departments.

Years later, she is riding the technology wave, leading a global organization that is tapping top talent in software engineering. “I did not choose to work in the tech sector,” says Janet, who is the Andela Kenya Country Director. “Life did!”

Just weeks to her graduation at Kenyatta University, she chanced on a childhood friend who would change the course of her career forever. “As we spoke, the job hunting topic came up. She requested me to send my resume in as the company she worked for was looking for accountants, and just like that my life in the tech sector began.”

Janet became an easy convert who turned into an addict of the tech gospel. Over the years, she built networks and got carried away by the impact that technology brought to different industries and people’s lives. “That’s what has kept me locked into this sector,” she adds, “Its dynamic and disruptive nature.”

Now working as Andela Kenya Country Director, she is leading perhaps the biggest scouting programme ever for software engineers who are then funneled into various companies and organizations worldwide. At Andela, she works with some of the drivers of technology and venture capital globally with a budget of $181 million (or Ksh18 billion).

The companies include Generation Investment Management, Chan Zuckerberg Initiative, Serena Ventures, Google Ventures and CRE Venture Capital, amongst others, which have pumped Ksh2 billion into the venture.

[ READ: Ten elegant Kenyan ladies who have made it big in business ]

Janet, who holds a Masters in Business Administration from Kingston University, London, knew pretty well she was joining a sector with low women population, but was determined to break the glass ceiling in an industry where trends change by the day and men appear to be favoured by the gods of high-tech innovation and execution.

“Yes women are under-represented in technology. However, I believe that on an individual level, one should not let your being a woman to be an obstacle in going for what you want.”

From that twist of fate that afternoon when she met her childhood friend, Janet has worked in the ICT sector for most of her professional life. Before she was appointed Andela Kenya Country Director, she served as director of finance & administration and previously director of operations at BRCK, a regional internet services company.

“I’m a firm believer in being persistent, working hard and not being afraid to try new things,” she says.

Even with a busy schedule, she says family remains an important pillar in her life. She often spends time with them in Nairobi, Machakos as well as Naromoru, away from the city’s hustle and bustle. “I also enjoy tinkering with gardening, as I find it very therapeutic,” she says.

The force behind her rise and growth in life, who doubles as her role model, is not unusual. She says her mother has been the biggest source of inspiration in my life. “She is an example of kindness, endurance, hard work and dedication. She inspires and motivates me to grow without any barriers and most of all, she is constantly praying for all her children.”

Janet says she’s the kind of mother many girls love to hate: the no-nonsense and strict type. “I have never seen her put her head down; if something is not right, she tackles it with the concerned person, so you can imagine growing up under her watchful eye [‘my siblings can attest to this’, she chuckles]. But in hindsight, I really thank God for her for being a ‘mean mother’ and given a chance, I would still choose her.”

Briefly tell us about the high and low moments in your career.

I have been involved in projects that have changed the telecommunication terrain such as the launch of Zuku Satellite in East Africa. I’ve also been a part of the team that provides the largest public WiFi network in East Africa, BRCK, and of course, more recently my current role as the Country Director Andela Kenya.

The lowest moment is when a company I worked for went through an acquisition by a South African company, and issues such as culture, change of management and employee relations were poorly handled. As a result, there was a high attrition of staff. The company later wound down and I always look back and wonder if things were done differently, how successful the company would be today.

Your advice to women aspiring for careers in technology?

My advice is to join companies that champion women. It is great to be a part of an organisation such as Andela that is paving the way for women in the African tech industry.

About 18% of our software engineers are female, compared to the global average of 7%. In order to attract more women, we’ve held multiple all-female recruitment cycles. Additionally, some of our engineers have built empowering communities for women in tech, such as Tech in Pink and Ladies in Tech. Andela also has many women in leadership positions; in fact, I joined a predominantly female team of country directors.

What is the one thing that, given a chance, you’d change about yourself?

Not a thing. I think everything that happens is there for a reason: to learn, to humble you, to improve yourself or to just give you a reality check.

[ NEXT:  Seven lifestyle changes you must make to become successful in the next one year ]