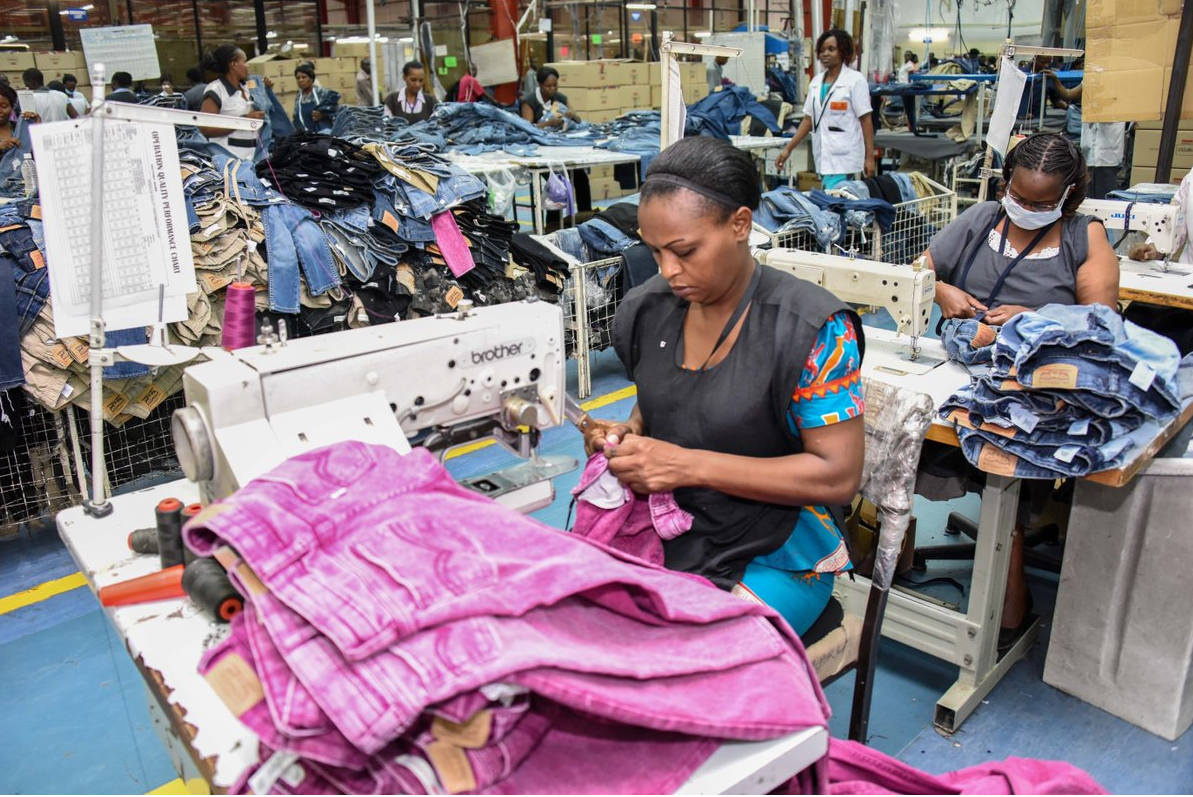 Kenya’s textile and apparel industry has the potential to alleviate the unemployment crisis in the country. [ Photo / State House-Twitter ]

Kenya and the United States of America (USA) formally launched negotiations on 8th July 2020 to seal a Free Trade Agreement (FTA). This will be first of its kind in Sub-Saharan Africa. This follows the US-Kenya Trade and Investment Working Group established by President Trump and President Kenyatta in August 2018, tasked with laying the groundwork for a stronger bilateral trade relationship.

It is expected that this deal will form a model for other African countries upon the expiry of the African Growth and Opportunities Act (AGOA) in 2025.

Free trade policies in general provide for free movement of goods and services between countries. This approach is based on the argument that enhanced trade increases wealth and is therefore a good thing to both Kenya and the US.

Kenya’s trade deal with the US is testament to the realization of Kenya’s growing market diversification and offers a myriad of opportunities especially with regards to market penetration, job opportunities, technological advancements, and innovation to spur economic growth and help Kenya raise standards to meet new manufacturing American requirements for export; and open up the local industry to new investments.

To understand and appreciate how these benefits would accrue, it is important to, first of all, understand the genesis and context that has informed Kenya’s decision to proceed with the FTA.

First the numbers. Total exports to the US from Kenya in 2019 were valued at $667million where nearly 70% ($453.73 million) were apparel items. Other goods exported included edible fruit & nuts (cocoa, brazil, cashew) valued at $74 million; coffee, tea & spice (coffee) $50 million; and special others (returns) $55 million).

This made Kenya the number one apparel exporter in Sub-Saharan Africa to the US, which is the largest apparel market globally with a market value of $343 billion. Although Kenya may not feature as one of the top ten importers for the US market, the textile and apparel industry has the potential to alleviate the unemployment crisis in the country.

According to a 2018 study by the Kenya Association of Manufacturers and the Kenya Business Guide, EPZ based manufacturers employ 52,000 people. The local sector directly employs about 21,000 people in the formal sector and over 30,000 informally.

The two sub-sectors cumulatively employ over 200,000 indirectly.  Further, 40,000 cotton farmers are currently engaged. Total annual turnover of the apparel subsector is estimated to be Ksh 38 billion while the textile sector is about Ksh 24 billion.

Further, reference has also been made to the AGOA which many feel that as opposed to negotiating an FTA, Kenya should instead join forces with the other countries benefiting from it to negotiate for an extension of terms. Currently, AGOA gives 39 sub-Saharan African countries duty-free access to the American market and is due to expire in 2025.

However, since the AGOA came into place, more sub-Saharan exports have headed to the EU, China and India than to America. This might explain the option taken up by the American government not to extend AGOA and instead have a more permanent arrangement to safeguard a future bilateral trade and investment framework.

Tanzania and Burundi have refused to sign the trade agreement on the grounds that the pact has failed to take care of their interests.

Moreover, while negotiating as a bloc has a host of advantages, it also has its own complexities and disadvantages.  For instance, while the EAC agreed to push for changes to the AGOA agreement in 2015, and come up with individual national AGOA strategies a number of EAC states- Rwanda, Tanzania and Uganda- employed tactics to delay the US talks.

Further, member states were unwilling to first sign the Economic Partnership Agreement (EPA) with the EU. Kenya signed and ratified the EPA, which guarantees duty-free and quota-free access of EAC products to the EU market in October 2016, after nine years of negotiations.

Other than Rwanda, the other member states are yet to sign it. Tanzania and Burundi have refused to sign the trade agreement on the grounds that the pact has failed to take care of their interests.

In effect, Kenyan horticulture, which accounts for about 20% of the country’s exports to the European market, was the hardest hit by the delay in signing the EPA.

While taking note of the opportunities arising and the justification offered for Kenya’s decision to go it alone, there have been valid concerns raised from different quotas with some calling for a halt in negotiations and for a more protectionist approach to restrict trade (importations).

On the other hand, the onus lies on the citizenry and to the private sector to organize and acquaint themselves with the discussions and the progress thus far and take advantage of the public participation opportunities to ensure that appropriate safeguards are in place to protect MSMEs especially. For instance, vigilance is needed to ensure that the policies such as “Build Kenya Buy Kenya”, affirmative action provisions in the Local Content and Public Procurement and Asset Disposal legislations are not undone by the proposed FTA.

KEPSA has constituted a consortium that brings some of its active members in this space including-(AMCHAM, KAM,KNCCI, KHF and ASNET) and select industry experts. The Kenya Private Sector Consortium / Working Group (PSWG) is a collaborative private sector working group that brings together a consortium of industry and business member organizations in support of the efforts of the Government of Kenya on the recently announced U.S-Kenya Trade Agreement negotiations, in order to galvanize and focus local private sector input into the process, ensuring that it is truly representative and meaningful.

The formation of this consortium is an affirmation of the private sector’s support and commitment to comprehensive engagement with government, to ensure that we realize an inspired, modern, comprehensive and truly reciprocal US–Kenya Trade Agreement.

As a working group, its core mandate will focus on the following broad areas:

Kenya is a trail blazer in Sub-Saharan Africa and the US is most likely to engage with other countries after Kenya. Hence it is important that Kenya does this well to set up a framework for engagement that may be duplicated by other countries. KEPSA has also formed a similar working group to engage on the UK- Kenya trade pack following BREXIT.

What has been agreed upon so far

Since the two heads of state met earlier in the year, what has been agreed upon so far is direct cargo flights. This will facilitate faster movement of goods and penetration into the US market and further ease logistics for importers from the US to Kenya.

This deal is espoused in the Amendment to the US-Kenya Air Transport Agreement which added the 7th freedom traffic rights for all cargo operations signed by the Kenya Cabinet Secretary for Transport, Mr. James Macharia, and the Assistant Secretary of State for Economic Affairs Ms. Manisha Singh. This amendment will permit all cargo airlines from the United States to fly between Kenya and a third nation without being required to stop first in the United States.

The aim is to fully open the Kenya air cargo services market to US carriers and liberalize the international civil aviation sector in Africa.

At the end, what would be most beneficial to both countries is an FTA that is coherent in policy for development; inclusive, adaptive and reflective of the socio-economic differences of its people; socially, economically and environmentally impactful; and takes cognizance and is respectful of regional integration goals, strategies, national constitutions and all international and regional agreements and instruments (including soft law) that states have either ratified or signaled their support for.

Carole Karuga is the CEO of the Kenya Private Sector Alliance (KEPSA).